A factor limiting recovery from bleaching in corals

Increases in seawater temperature can cause coral bleaching through the loss of symbiotic algae. Corals can recover from bleaching by recruiting algae into host cells from the residual symbiont population or from the external environment. However, the high coral mortality that often follows mass-bleaching events suggests that recovery is limited in the wild.

A joint research team from the National Institute for Basic Biology (NIBB), Tohoku University in Japan, and James Cook University in Australia has examined the effect of pre-exposure to heat stress on the capacity of symbiotic algae to infect cnidarian hosts using the Aiptasia (sea-anemone)-zooxanthellae (algae) model system. They discovered that the symbiotic algae lose their capacity to infect the host once they are exposed to heat stress. These results suggest that recovery from bleaching can be limited by the loss of symbiont infectivity following bleaching-inducing heat stress.

Coral reefs are the cornerstone of biologically enriched coral reef ecosystems, but their existence is in danger due to global change and warming. Coral-algae symbiosis is sensitive to increased seawater temperature, resulting in coral bleaching through loss of the algal symbionts, zooxanthellae. Corals can recover from bleaching by recruiting algae into their cells from the residual symbiont population or from the external environment. However, in the field, recovery from bleaching is often limited, resulting in mortality of corals due to starvation.

In a study published in The ISME Journal, graduate student of the National Institute for Basic Biology, Mariko Kishimoto, focused on the ability of symbiotic algae to infect the host following to heat stress and identified a factor limiting recovery from bleaching.

“In this study, we used Aiptasia (sea-anemone), instead of corals, as Aiptasia are very easy to maintain and use for experiments in the laboratory. And importantly, Aiptasia form the symbiotic relationship with the symbiotic algae, zooxanthellae, and also show bleaching under heat stress like corals do.” Ms. Kishimoto said.

“The infectivity of algae was apparently lost after culturing at 32 ºC. Importantly, culturing Aiptasia, instead of algae, at 32 ºC did not influence infectivity. So our results showed that recovery from bleaching can be limited by the loss of symbiont infectivity following bleaching-inducing heat stress.”, Ms. Kishimoto said.

Further study showed incubation at 32 ºC was non-lethal for the symbiotic algae which showed recovery of the loss of infectivity after culturing at optimal growth conditions.

The team also found that a different algal strain (CCMP2459) did not lose their infectivity after exposure to heat stress.

Associate Professor Shunichi Takahashi of the National Institute for Basic Biology, who led the research team, said, “Our findings suggest that heat tolerant algal symbionts might give a chance for bleached corals to recover”. 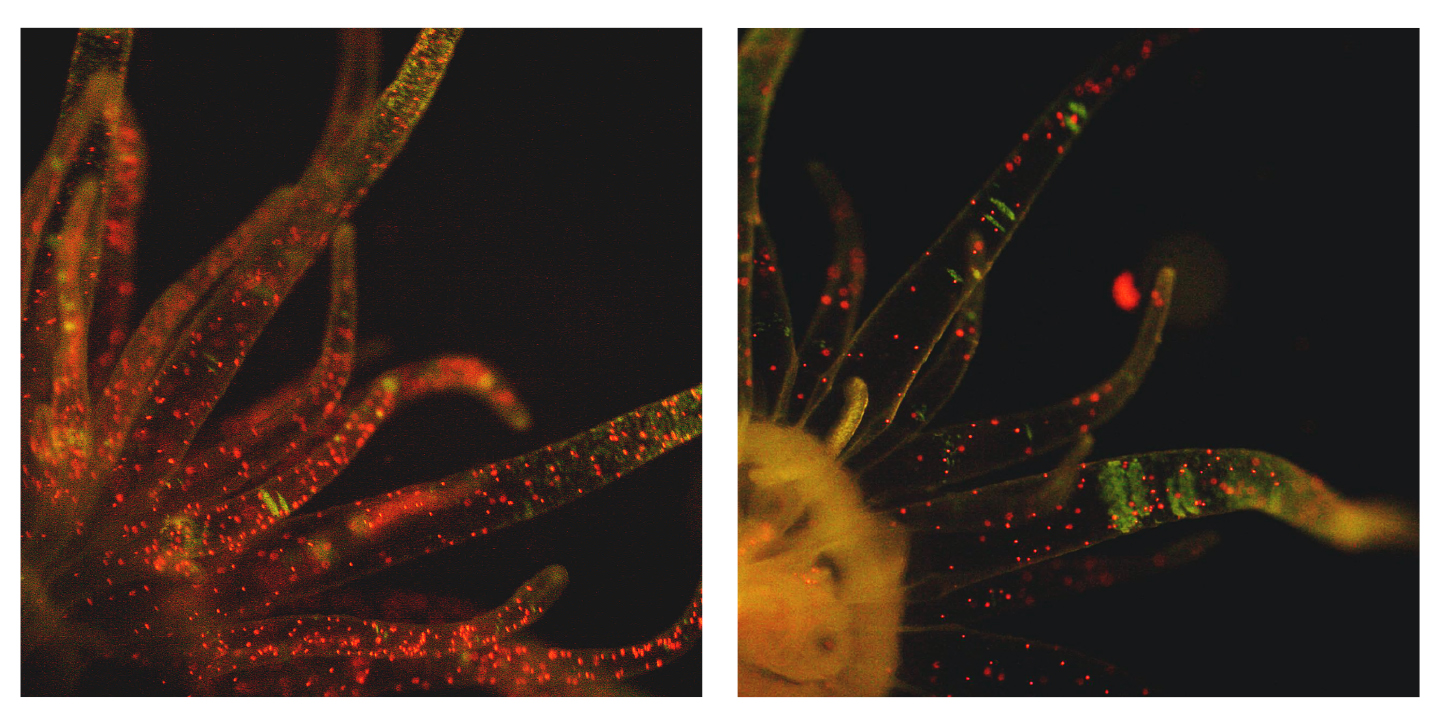