Dr. Toshiya Nishimura, Associate Professor Minoru Tanaka and their colleagues of the National Institute for Basic Biology, in collaboration with Dr. Satoru Kobayashi of the Okazaki Institute for Integrative Bioscience, and through joint research with Kyushu University's Dr. Mikita Suyama and Dr. Yasuyuki Ohkawa, revealed that the foxl3 gene works in the germ cells of females "to suppress differentiation into sperm".

In females lacking functional foxl3 genes, the small fish's body appearance is still totally female, however a large number of sperm are formed in the ovaries, and a small number of eggs are formed at the same time.

It has also become clear that in these females lacking the function of foxl3 functional sperm can be obtained in a shorter period of time than in normal wild-type males. Applied research into uses for aquaculture is already underway.

“In spite of the environment surrounding the germ cells being female, the fact that functional sperm has been made surprised me greatly. That this sexual switch present in the Germ Cells is independent of the body's sex is an entirely new finding,” Dr. Nishimura said. 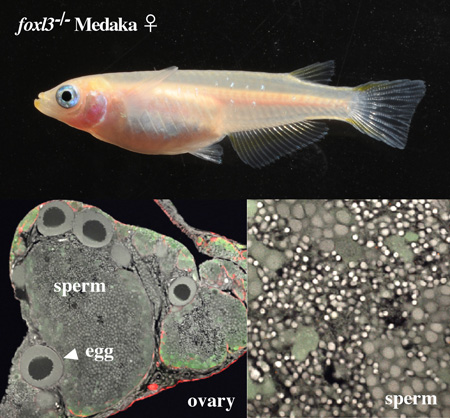 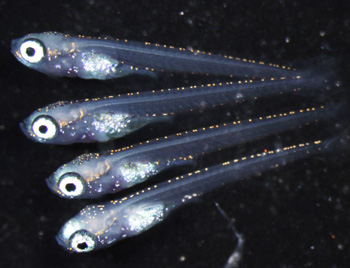 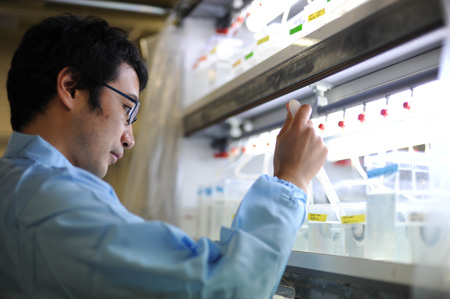 Dr. Toshiya Nishimura in an aquarium room at the National Institute for Basic Biology

Laboratory of Molecular Genetics for Reproduction