Adenomatous polyposis coli 2 (APC2) is a family member of APC and mainly expressed in the nervous system. The research group of Professor Masaharu Noda and Associate Professor Takafumi Shintani, Division of Molecular Neurobiology at NIBB, previously reported that APC2 plays a critical role in axonal projection through the regulation of microtubule stability. Here, they show that a lack of Apc2 induces severe laminary defects in some regions of the mouse brain including the cerebral cortex and cerebellum. In vivo BrdU labeling and immunohistochemical analyses with specific markers revealed that the laminary abnormalities are a result of dysregulated neuronal migration by a cell-autonomous mechanism. They found that APC2 is distributed along actin fibers as well as microtubules by TIRF microscopy. Cerebellar granule cells in dissociated cultures and in vivo showed that BDNF-stimulated directional migration is impaired in Apc2-deficient neurons. They revealed that this impairment stems from the dysregulation of Rho family GTPase activation and TrkB localization, which disrupts the formation of BDNF-stimulated F-actin at the leading edge. Thus APC2 is an essential mediator of cytoskeletal regulation at leading edges in response to extracellular signals.

These results will be published in the Journal of Neuroscience on May 9th. 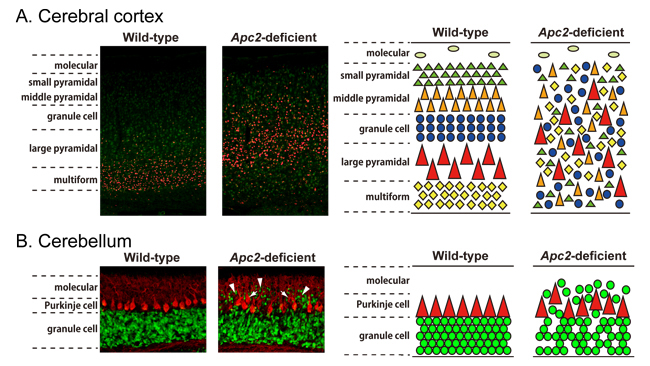 Figure: Abnormal layering in the brain of Apc2-deficient mice 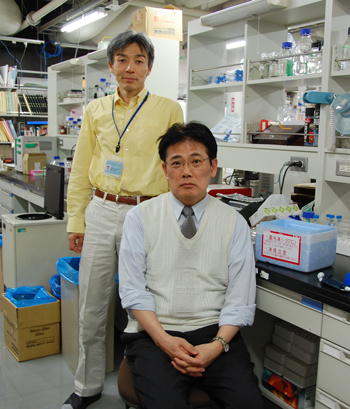