An ancestral link between genetic and environmental sex determination

Researchers from Osaka University and the National Institute for Basic Biology, Japan, have found a highly significant connection between the molecular mechanisms underlying genetic and environmental sex determination. The scientists report in the open-access journal PLoS Genetics the identification of a gene responsible for the production of males during environmental sex determination in the crustacean Daphnia.

The researchers cloned Doublesex (Dsx) genes from Daphnia magna, a freshwater brachiopod crustacean that clones itself to produce males in response to certain environmental cues. The Dsxgenes play an important role in controlling sexual differences in organisms using GSD such as nematodes, insects, and vertebrates. Knocking out one particular Dsx gene, DapmaDsx1, in male embryos resulted in the production of female traits including ovarian maturation, whereas ectopic expression of DapmaDsx1 in female embryos resulted in the development of male-like phenotypes.

The researchers infer that there is an ancient, previously unidentified link between genetic and environmental sex determination. This study was confined only to the role of Dsx in ESD, so it would be highly desirable to establish the link between the environmental signal and Dsx expression. However, this work lends support to the "Doublesex hypothesis" of sex determination, in which many different sorts of upstream regulatory pathways could converge on Dsx-family genes, which would serve as the basis of sexual differentiation mechanisms across the animal kingdom. 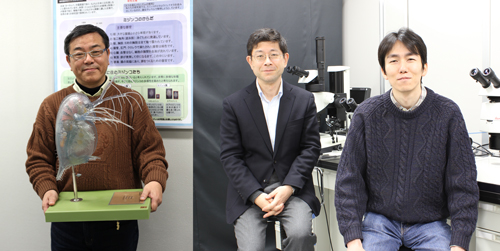