Using the amphibian Xenopus laevis as a model, Drs. Noriyuki Kinoshita and Naoto Ueno from the National Institute for Basic Biology (NIBB), Japan and Dr. Ileana Cristea from Princeton University, USA have demonstrated that physical forces, such as centrifugal force, enhance cell-to-cell attachment and increase the stiffness of embryonic tissues as a result of force induced cell shape change. In addition, they have also elucidated a part of the signaling pathway underlying the phenomenon. This work revealing how physical forces build-up the structurally robust and stable embryonic tissue architectures during development was published online in the March 17 edition of Cell Reports. 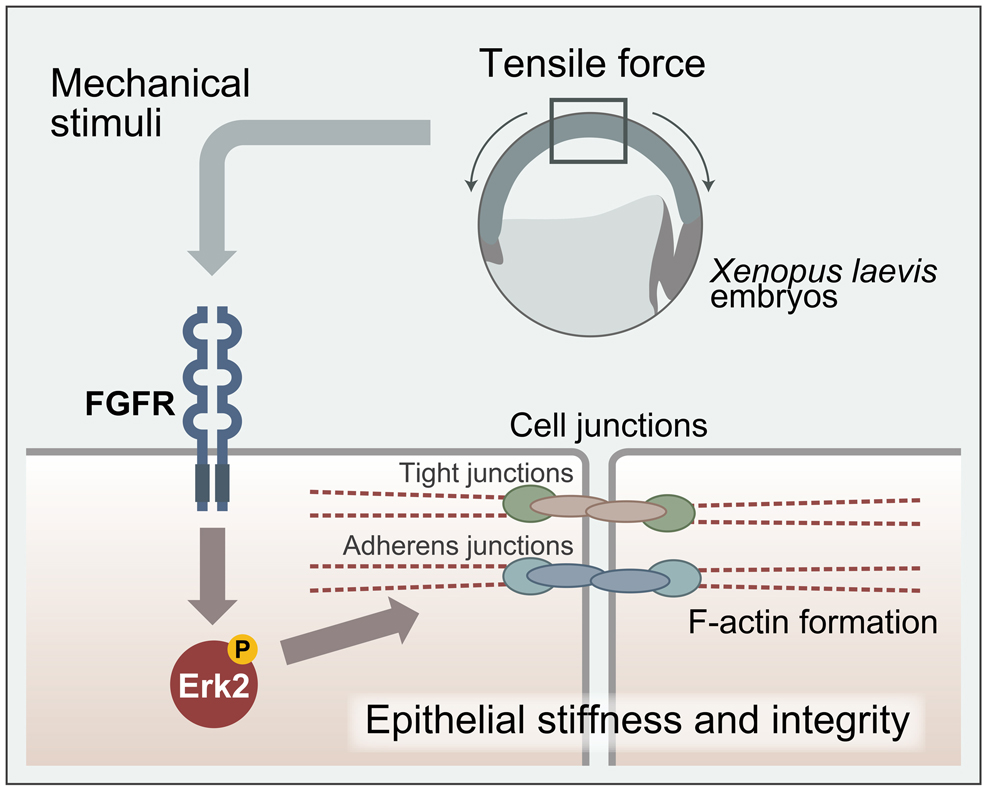 It is being increasingly recognized that in addition to genes and proteins, physical forces are also essential components for living organisms to proceed with normal development and maintain homeostasis.

This research has further deepened the existing collaboration between NIBB and Princeton University, which in turn has led to an article being published in 2019 (Ref: https://doi.org/10.1016/j.cels.2019.01.006), and investigated the force-dependent cellular event by clarifying detailed molecular and cellular mechanism. In the research referred to previously, the authors demonstrated that a sizable number of proteins in embryonic tissues become phosphorylated immediately after centrifugal or compression forces are applied to embryos, and that ZO-1, a tight junction component accumulates at the junction, leading to enhanced cell-to-cell contact caused by the bridging of said junctions. The authors found that Erk2, an important signaling component mediating various external stimuli, becomes phosphorylated by forces and translocated to the nucleus. It was additionally confirmed that inhibition of Erk2 phosphorylation by its chemical inhibitor attenuated the force induced enhancement of cellular junctions and stiffening of tissues, demonstrating that the response of Erk2 is essential for the force-induced cellular remodeling process. Furthermore, the group also found that the Erk2 phosphorylation is triggered by the signal through the receptor for fibroblast growth factor (FGF), FGFR and proposed an interesting mechanism that FGFR is activated by forces in the absence of FGF ligand, which is a unique mechanism opposing the conventional mechanism of FGFR activation by its ligand. These results also suggest that the activation of FGFR is triggered by force induced cell deformation (shape change). This work represents a significant step towards addressing the long-standing question of how physical forces influence cell and tissue behaviors.

###
This work was conducted as an international collaboration between Naoto Ueno’s group, which includes Noriyuki Kinoshita and Yutaka Hashimoto (currently at Nagoya City University) at NIBB, Japan, and Ileana Cristea at Princeton University, USA.

This research was supported by KAKENHI 22127007 and 15H05865 from MEXT and JSPS in the case of Dr. Ueno and by the NIH R01HL135007 in the case of Dr. Cristea. The collaboration between Drs. Ueno, Kinoshita, Hashimoto and Cristea is also supported by the NINS Strategic International Research Exchange Promotion Program. The authors would like to extend their deepest thanks to the NIBB Functional Genomics Facility for providing technical support in our proteomic analyses.