The steady production of sperm relies on the number of sperm stem cells in the testis remaining constant. Researchers including Asst. Prof. Yu Kitadate and Prof. Shosei Yoshida (developmental biologists at the National Institute for Basic Biology within the National Institutes of Natural Sciences in Japan) and Prof. Benjamin Simons (a theoretical physicist at the University of Cambridge in the UK) have revealed a novel mechanism for stem cell number control. Their results show that constant sperm stem cell numbers are achieved, in mouse testes, through a self-organized process in which they actively migrate and compete for a limited supply of self-renewal-promoting fibroblast growth factors (FGFs). This study was published on line in Cell Stem Cell on Nov. 20th, 2018.

To ensure a balance between the loss of differentiated cells and their replacement in long-lived multicellular organisms, it is critically important to keep the number of tissue stem cells constant. Failure to maintain stem cell number is thought to underlay the progression of ageing and disease. In tissues like the testis and ovary of the fruitfly Drosophila and intestine of mammalians, stem cells are clustered in their specialized home where self-renewal-promoting factors are abundant: the stem cell niche. In these tissues, stem cell numbers are controlled simply by the capacity of the niche. However, sperm stem cells are not clustered in mouse testis, but are highly motile and widely dispersed across the basement membrane. Yet, their density remains surprisingly uniform thus raising the question of how their numbers are regulated.

In this study, the researchers found that a subset of lymphatic endothelial (LE) cells produce FGFs (Fgf5, 8 and 4 in particular), which promote stem cell self-renewal.

Asst. Prof. Kitadate said, “The lymphatic endothelial cells in the testis were described via the use of electron microscopy in the 1970s, but had scant attention paid to them for a long time. By a stroke of good luck, our screening met these cells again and threw light on their hidden roles!”

Quantitative analyses of mice with increased or decreased FGF production revealed a simple mechanism: migratory stem cells uptake and consume FGFs. Stem cells which consume more FGFs are likely to duplicate, while those that consume less are inclined to differentiate. Under this framework, stem cells effectively compete with each other for a limited supply of FGFs, leading the stem cell number to automatically adjust to a particular value, depending on the rate of FGF supply. The discovery of a novel, and extremely simple, mechanism of stem cell number control based on “competition for self-renewal promoting factors (or mitogens)” advances our understanding of the regulation of stem cells in tissues without a canonical, anatomically definable stem cell niche – a microenvironment sometimes called an “open niche”.

In the mouse testis, sperm stem cells (pink) migrate over the basement membrane (brown), capturing and consuming FGFs (green) produced by specialized LE cells (depicted as large green cells). Competition occurs here between stem cells for a limited supply of FGFs, from which homeostasis emerges as a self-organized process.

Prof. Yoshida said, “Sperm stem cells migrate in the testis to intake FGFs, just as cows move around the meadow to eat the grass which they live on. Interestingly, the dynamics of stem cells can be described using mathematics similar to that for ecosystem - a fruit of my beloved interdisciplinary research team!” 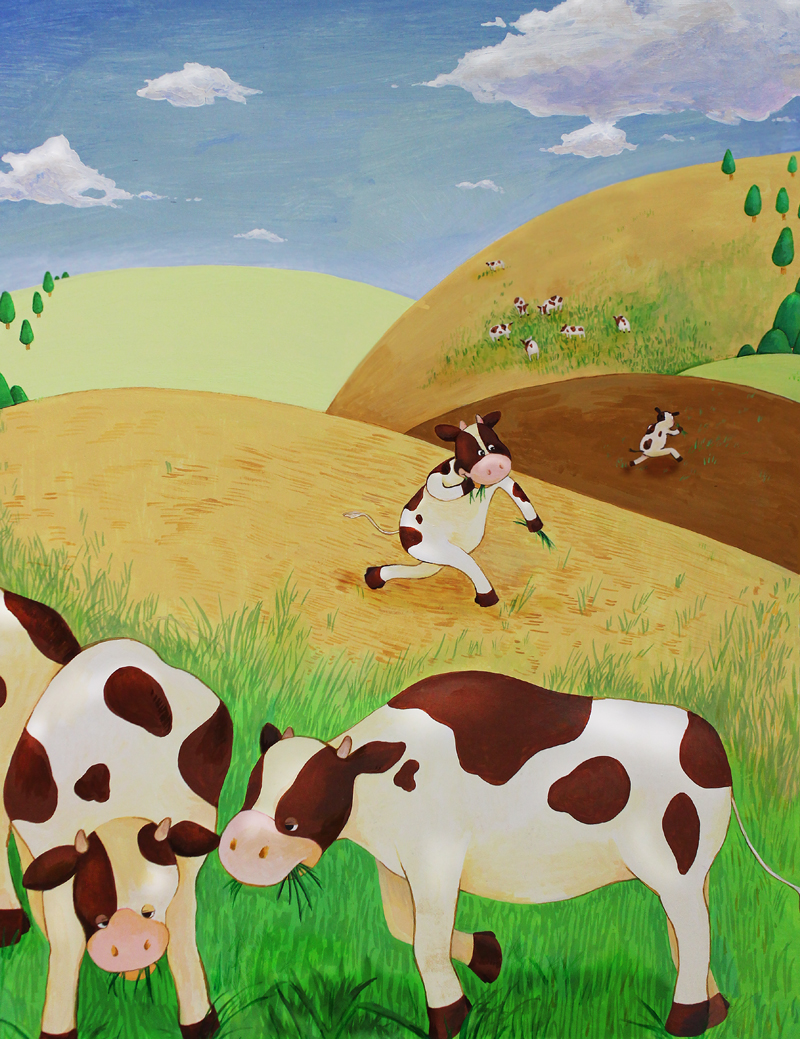 In mouse testis, Kitadate et al. found that homeostasis of sperm stem cells is regulated through mechanisms analogous to those seen in a meadow. As cattle move around to graze, stem cells migrate to uptake and consume fibroblast growth factors (FGFs) secreted by cells beneath the basement membrane. Through competition for limited supply of FGFs that promote self-renewal, the stem cell number will fall naturally in a certain range. This is a kind of ecology: The number of stem cells (cattle) that a tissue (meadow) can maintain is determined, eventually, by the production rate of FGF (grasses). Further, as cattle become dense or sparse in areas with abundant or poor grasses, respectively, stem cells show biased distribution to the FGF source. Such “stem cell ecology” may be a principle shared by various tissues. Illustration by Sara Nishida.