Dr. Katsusuke Hata and the colleagues in Yamamori lab of the Brain Biology, report that DNA Methylation and Methyl-Binding Proteins control the specific expression of a group of genes in the monkey association areas. Distinct anatomical regions of the neocortex subserve different sensory modalities and neuronal integration functions, but mechanisms for these regional specializations have been elusive. Involvement of epigenetic mechanisms for such specialization through the spatiotemporal regulation of gene expression is an intriguing possibility. Dr. Hata examined whether epigenetic mechanisms might play a role in the selective gene expression in the association areas (AAs) and the primary visual cortex (V1) in macaque neocortex. By analyzing the two types of area-selective gene promoters that the research group previously identified, he found a striking difference of DNA methylation between these promoters, i.e., hypermethylation in AA-selective gene promoters and hypomethylation in V1-selective ones. Methylation levels of promoters of each area-selective gene showed no areal difference, but a specific methyl-binding protein (MBD4) was enriched in the AAs, in correspondence with expression patterns of AA-selective genes. MBD4 expression was mainly observed in neurons. MBD4 specifically bound to the AA selective genes and activate one of the genes, PNMA5, in vitro. Finally, the group proved that MBD4 controls the AA-selective genes in vivo in collaboration with researchers in National Institute of Physiology and Jichi Medical school, Japan. These results demonstrate that methylation in the promoters and MBD4 play an important role in the primate area-selective gene expression. 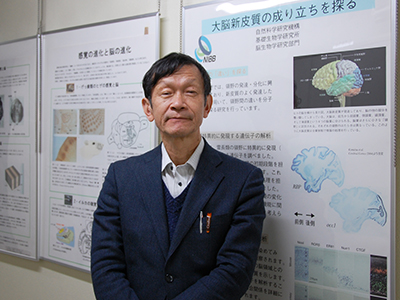