Measuring the hardness of living tissues without damage

During development, when a fertilized egg transforms its shape dramatically into an animal’s body, cell populations forming tissues are in a fluid state and thus the tissue can be easily deformed. Cells also generate mechanical forces during development that contribute to the shaping of the tissues and organs. An important question is how organisms secure/proceed with proper tissue and organ formation in these conditions. In order to understand the process of tissue and organ formations, it is essential to understand how physical characteristics of tissues responding to mechanical stresses influence the process of organogenesis.

To tackle this problem, a research team from the National Institute for Basic Biology (NIBB) and Kyoto University has proposed a unique non-invasive (i.e. without leaving any damage behind) way of measuring the hardness of tissues by combining physical modeling of the tissues with statistical estimation.

The member of the research team, Professor Kazuhiro Aoki said, "Although many in our field use conventional ways of testing hardness of tissues, such as cutting or applying pressure to embryonic tissues which are rather soft, the resulting tissue damage was a big concern because it hampers normal morphogenesis.” Assistant Professor Yohei Kondo said, “Our proposed methodology involves measuring the spontaneous deformation of the cell population as well as the mechanical forces applied over the tissue. Based upon the information acquired from these observations, the hardness of the tissue is then able to be estimated.”

The effectiveness of the proposed technique has been experimentally validated with monolayer-cultured cells. The research group also revealed that the hardness/stiffness of the tissues can be changed depending on not only the physical properties of materials composing the cells, but also on the cell activities controlled by molecular motor, etc. The group hopes that this work will serve as an important step towards further understanding of the mechanism of organogenesis. The results of this research were published in the journal, PLoS Computational Biology. 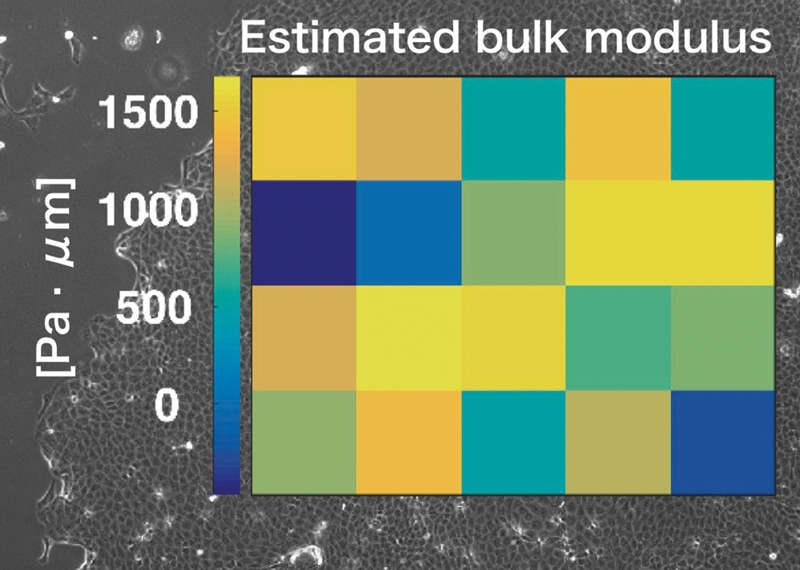 Figure. The heatmap of estimated values of bulk modulus is overlaid on the corresponding phase contrast image of cell monolayer.
More information
PREV
NEXT