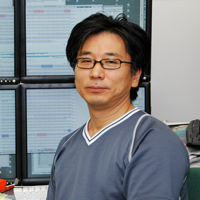 The aim of this laboratory is to research reproductive hormones in invertebrates, especially in echinoderms, and to analyze the mechanisms by which they work. The comparisons of such molecules and mechanisms in various species are expected to provide insights into the evolution of reproductive hormone systems.

Gonadotropins play important regulatory roles in reproduction in both vertebrates and invertebrates. The vertebrate gonadotropins, LH and FSH, are structurally and functionally conserved across various species, whereas no such molecule has been identified in invertebrates. The insect parsin hormones are assumed to be the physiological counterpart of LH and FSH in mammals. Some gonadotropic hormones (e.g. the mosquito’s egg development neurosecretory hormone, the sea hare’s egg-laying hormone, and the terrestrial isopod’s androgenic gland hormone) have been found in invertebrate species. More recently, an insulin-like peptide was reported to be responsible for the regulation of egg maturation in the mosquito, Aedes aegypti, thus demonstrating the involvement of insulin signaling in egg maturation among invertebrates.

The gonad-stimulating substance (GSS) of an echinoderm, the starfish, was the very first gonadotropin to be identified in invertebrates. GSS mediates oocyte maturation in starfish by acting on the ovary to produce the maturation-inducing hormone (MIH), 1-methyladenine, which in turn induces the maturation of the oocytes. In this sense, GSS is functionally identical to vertebrate LH, especially piscine and amphibian LHs, and acts on the ovarian follicle cells to produce MIH to induce the final maturation or meiotic resumption of the oocyte. Considering the functional similarity that GSS shares with vertebrate LH, it is very important from an evolutionary point of view to know the chemical and molecular structure of GSS. We cloned the gene encoding the amino acid sequence of purified GSS from radial nerves of the starfish, Pateria pectinifera. Interestingly, phylogenetic analyses revealed that it belonged to the insulin/insulin-like growth factor (IGF)/relaxin superfamily and, more precisely, to the subclass of relaxin peptides (Figure 1). 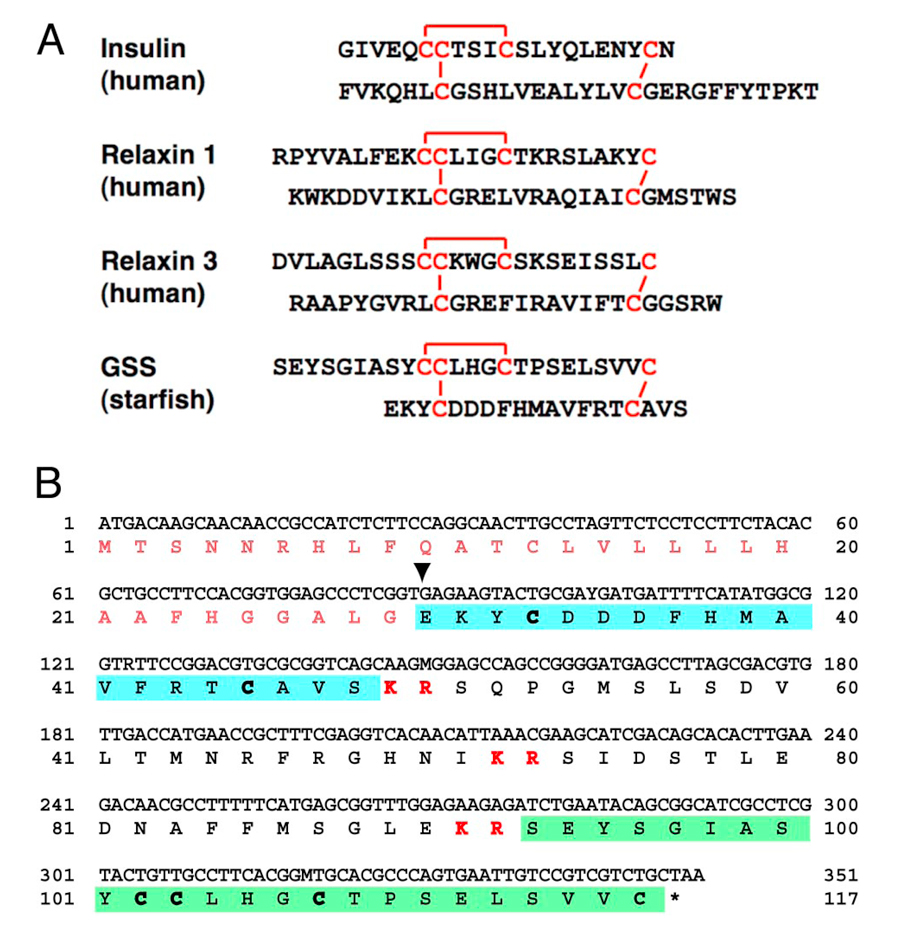 Figure 1. Amino acid sequence of starfish GSS. (A) Comparison of the heterodimeric structure of starfish GSS with those of various representative members of the insulin superfamily. The cysteine bridges are shown in red. (B) Coding DNA sequence and predicted amino acid sequences of GSS. Sequences of the A and B chains are shown in the green and blue boxes, respectively. Characters shown in red boldface indicate basic dipeptides that are the sites of proteolytic cleavage. The inverted triangle shows the deduced cleavage site of the signal peptide.

In a collaborative effort with Prof. Yoshikuni’s Laboratory at Kyushu Univ., we are searching for reproductive hormones in echinoderms, including starfishes, brittle stars, sea urchins, sea cucumbers, and crinoids. The collaborating parties have been able to purify physiological materials which induce egg maturation from nerve extracts and analyze them with a protein sequencer and a tandem mass spectrometer in the analytical center of our institute. One of them, named cubifrin, which is an IWMGY-amide peptide, is in the sea cucumber Aposticopus japonicus. The others are in preparation for publication.

We have identified many neuropeptides from our EST analysis of nerve tissues and many from RNA-seq and WGS data of the NCBI database. In particular, relaxin like peptide precursor genes and insulin/IGF like peptide precursor genes were identified from many species. We are producing these neuropeptides by biological methods (e.g. bacterial systems and yeast systems) to provide to collaborating researchers for biological assays.

III. Search for the lost mutants of female hormones E2 in Oryzias latipes

Sequence analysis by capillary sequencer was carried out from the tilling library of O. latipes in order to analyze the function of fish female reproductive hormone E2 as a part of our collaborative research. Upon the discovery of aromatase mutants, a detailed analysis was carried out using these strains.