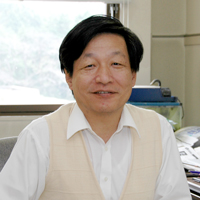 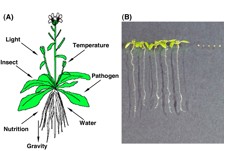 Figure 1: Various stimuli from environment and peroxisome function on germination. (A) Plants recognize environmental stimuli and utilize them as signals for survival. (B) Wild-type plants (left), but not ped1 mutants (right), can germinate on medium without sucrose. ped1 mutants are defective in ß-oxidation of peroxisomes so that they are not able to utilize storage lipids for gluconeogenesis.

The aim of this division is to clarify the molecular mechanisms underlying induction, differentiation, and interaction of organelles, and to understand the integrated function of individual plants (Figure 1B) through organelle dynamics, especially peroxisomes (Figure 2B and 2C), vacuoles (Figure 2A, 2B and 2D) and ER-derived vesicles (Figure 2E). 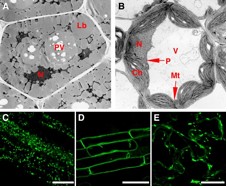 I. Reversible transformation of plant peroxisomes

Almost all of the peroxisomal matrix proteins are known to contain the targeting signal to peroxisomes (PTS) within the molecules. We identified 256 gene candidates of PTS-containing proteins and another 30 genes of non-PTS-containing proteins from Arabidopsis genome. Custom-made DNA microarray covering all these genes was used to investigate expression profiles of the peroxisomal genes in various organs. In parallel, we made a two-dimensional protein map of glyoxysomes and leaf peroxisomes isolated from Arabidopsis. Peptide MS fingerprinting analyses allowed us to identify novel proteins exists in peroxisomes.

To better understand peroxisome biogenesis, we isolated a number of Arabidopsis mutants having aberrant peroxisome morphology (apm mutants) based on the different pattern of GFP fluorescence from the parent plant, GFP-PTS1, in which peroxisomes with normal size and number can be visualized with GFP (Figure 2C). Analyses of these apm mutants and identification of APM genes will identify components necessary for peroxisome biogenesis and address the regulation of its mechanism.

IV. Analysis on the role of ER bodies and its biogenesis

Plant cells develop various types of endoplasmic reticulum (ER)-derived structures with specific functions. ER bodies, which are surrounded by ribosomes, are rod-shaped structures (5 μm long and 0.5 μm wide), and are widely observed in the epidermal cells of whole seedlings (Figure 2E). Interestingly, rosette leaves of adult plants had no ER bodies, but ER bodies are accumulated after wounding or jasmonic acid treatment in this organ, suggesting that ER bodies have a function in the defense against herbivores. Arabidopsis nai1 mutant was isolated as a mutant that does not contain ER bodies. Transient expression of NAI1 induced ER bodies in the nai1 mutant, providing direct evidence that NAI1 plays a role in the formation of ER bodies. We are trying to isolate additional components that are involved in ER body formation.

The vacuolar processing enzyme (VPE) belongs to the cysteine protease family found in higher plants and animals. Plant VPE homologues are separated into three subfamilies: seed type, vegetative type and embryogenic type. Seed type VPE is responsible for the maturation of seed storage proteins. In contrast, the function of vegetative and embryogenic type VPEs was obscure. Recently, we revealed a novel function of VPE in various types of programmed cell death (PCD) in plants. The plant hypersensitive response (HR) constitutes well-organized PCD. No HR occurs on the tobacco mosaic virus-infected leaves of VPE-silenced tobacco plants (Figure 3A). Fumonisin B1 (FB1), a fungal toxin, induces cell death in Arabidopsis. The features of FB1-induced cell death were completely abolished in the Arabidopsis VPE-null mutant (Figure 3B). δVPE, an embryogenic type VPE, specifically and transiently expresses in two cell layers (ii2-ii3) of the seed coat at an early stage of seed development. At this stage, PCD accompanying cell shrinkage occurs in ii2-ii3. In a dvpe mutant, shrinkage of these layers was delayed (Figure 3C). An ultrastructural analysis showed that the disintegration of the vacuolar membranes occurs before the cell death in these PCDs. These results suggest that VPE is involved in PCD by vacuolar collapse, and that plants evolve a death strategy mediated by a vacuolar system, which is not seen in animals. 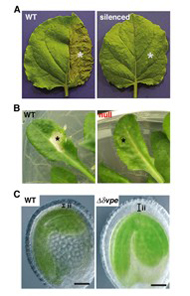 Figure 3: VPE deficiency suppresses various types of programmed cell death (PCD) in plants. (A) The non-silenced (WT) and VPE-silenced (silenced) Nicotiana benthamiana plants were infected with tobacco mosaic virus on halves of their leaves (indicated by asterisks). The photographs were taken after 24 hours. (B) Leaves of wild-type (WT) and VPE-null mutant (null) Arabidopsis plants were infiltrated with FB1, a fungal toxin (indicated by asterisks). The photographs were taken after 5 days. C, Thickness of inner integuments (ii) of the seed coats is reduced in wild-type (WT) seed at the early stage, whereas it is not reduced in the dvpe mutant seed of Arabidopsis. PCD accompanies the shrinkage of two cell layers of the seed coat in wild type seeds.

Molecular chaperones are cellular proteins that function in the folding and assembly of certain other polypeptides into oligomeric structures but that are not, themselves, components of the final oligomeric structure. To clarify the roles of molecular chaperones on cell differentiation, we have purified and characterized chaperonin and Hsp70s and analyzed their roles in the translocation of proteins into chloroplasts. Recently, we started to characterize HSP90s using a specific inhibitor of HSP90 and transgenic plants expressing mutated Arabidopsis HSP90.

The Plant Organelles Database 2 (PODB2) was built to promote a comprehensive understanding of organelle dynamics. This public database is open to all researchers. PODB2 consists of 4 individual parts: the organelles movie database, the organellome database, the functional analysis database, and external links. The organelles movie database contains videos of organelle movements and 3D structures (Figure 4). The organellome database provides images of various plant organelles that were visualized with fluorescent and nonfluorescent probes in various tissues of several plant species at different developmental stages. The functional analysis database is a collection of protocols for plant organelle research. The amount of included data is increasing day by day. It is expected that PODB2 will contribute to systems biology through the combination of the included data with other 'omics' data and computational analyses. In addition, we will release an updated version for educational use soon. We expect that PODB2 will be a useful tool to help researchers gain greater knowledge of plant organelles, as well as the general public who want to explore plant cell biology. 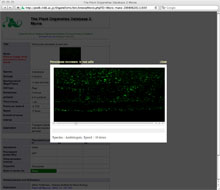