Leptin is an adipocyte-derived hormone that stimulates hypothalamic neurons to strongly inhibit food intake. Leptin signaling in the hypothalamus, a part of the mid-brain, thus plays a crucial role in the regulation of body weight: Leptin resistance, in which leptin signaling is disrupted, is a major obstacle to the improvement of obesity. However, the exact mechanisms underlying leptin resistance in obese patients have yet to be elucidated.

The research group of Professor Masaharu Noda, Associate Professor Takafumi Shintani, and a graduate student Satoru Higashi of the National Institute for Basic Biology (NIBB) demonstrated that protein tyrosine phosphatase receptor type J (PTPRJ) inhibits leptin signaling and that induction of PTPRJ in the hypothalamus is a cause of leptin resistance.

They showed that Ptprj is expressed in hypothalamic neurons together with leptin receptors, and that PTPRJ inhibits activation of the leptin receptor through dephosphorylation of JAK2, a protein tyrosine kinase associated with the leptin receptor. Ptprj-deficient (Ptprj-KO) mice showed no growth retardation, but exhibited lower weight gain, because of a lower food intake and a lower adiposity, than wild-type (WT) mice (Figure A and B). Importantly, PTPRJ expression in the hypothalamus was up-regulated by diet-induced obesity, and, thus, diet-induced leptin resistance did not occur in Ptprj-KO mice (Figure C). Furthermore, the overexpression of PTPRJ in the hypothalamus induced leptin resistance in lean mice. These results strongly indicate that PTPRJ plays critical roles in the development of leptin resistance. The inhibition of PTPRJ may be a potential strategy for improving obesity.

The results of this research were published in ‘Scientific Reports’ on September 14, 2017. 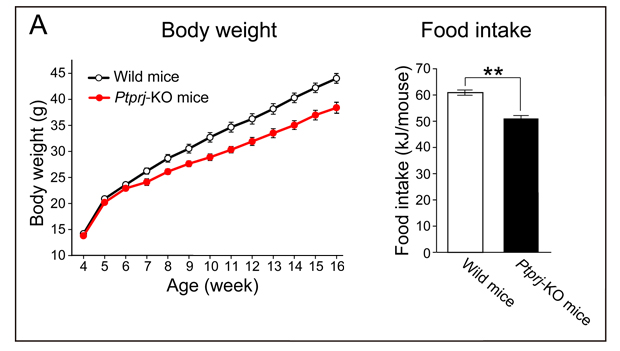 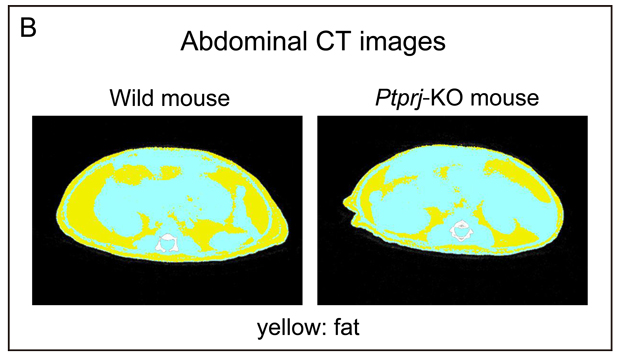 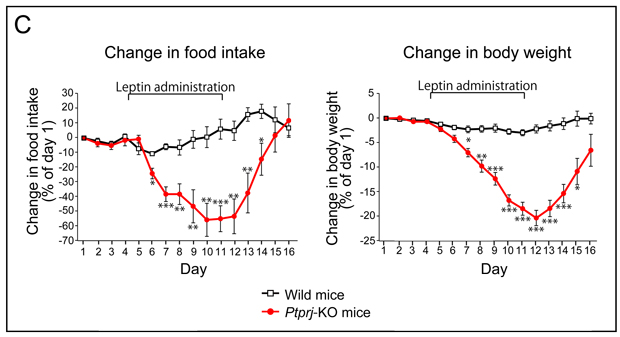 Figure C. Daily change in food intake by (left) and daily change in body weights of (right) WT and KO mice fed HF/HSD for 14 weeks upon daily administration of leptin. Leptin (500 ng) or vehicle was i.c.v. injected as indicated 1 h before the onset of the dark phase in WT and KO mice.

"PTPRJ Inhibits Leptin Signaling, and Induction of PTPRJ in the Hypothalamus Is a Cause of the Development of Leptin Resistance"