In an article published on September 5th in Biophysical Journal, the team of Associate Professor Kensuke Kawade at the Okazaki Institute for Integrative Bioscience and National Institute for Basic Biology in Japan showed that a transcriptional co-activator ANGUSTIFOLIA3 (AN3) forms a signaling gradient along the leaf proximal-to-distal axis to determine cell-proliferation domain. In particular, by experimental and theoretical approaches, they demonstrated that pure diffusion in a growing tissue is sufficient to explain the AN3 gradient formation. This work provides evidence that the diffusion-based model of morphogen is viable in developmental patterning of multicellular organisms.

Spatial gradient of signaling molecules is critical for establishing developmental patterns of multicellular organisms. Around half a century ago, a seminal work proposed a theory that pure diffusion of signaling molecules from a restricted source may explain the establishment of such tissue-scale gradients (Crick, 1970). Despite the prominence of this diffusion-based model in development, quantitative studies, largely performed in animals, have not yet demonstrated this simple mechanism in multicellular tissues.

In an article published in Biophysical Journal, Dr. Kawade’s team at OIBB/NIBB, in collaboration with scientists in the Institut Jacques Monod (France), Rikkyo University (Japan) and University of Tokyo (Japan), solved a long-standing argument of the diffusion-based model for morphogen gradient formation. They measured molecular transport through plasmodesmata, a unique cellular channel in plants directly connecting neighboring cells, by trans-scale FRAP (Fluorescence Recovery After Photobleaching) assays. This analyses revealed biophysical properties of diffusive molecular transport through plasmodesmata. Based on this diffusion-based framework, they succeeded in demonstrating that the AN3 gradient could be achieved solely by pure diffusion process through plasmodesmata in developing leaf primordia. Because the AN3 signaling gradient corresponds to the cell-proliferation domain, this study can explain how spatial and temporal dynamics of cell proliferation, and therefore tissue growth, is regulated during leaf development.

These discoveries provide a significant step forward in our understanding of how the simple biophysical phenomena ‘diffusion’ governs developmental patterning in multicellular organisms. 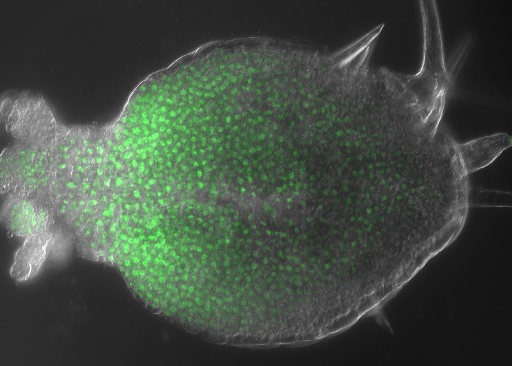 Morphogen gradient in a leaf primordium

AN3 expression is visualized by using green fluorescent protein, GFP. Long-range gradient of AN3 can be seen from base (left) to tip (right), which was achieved by a simple diffusion-based model in the growing leaf.