How temperature determines sex in alligators

Some reptiles such as crocodilians and some turtles are known to display temperature-dependent sex determination (TSD), where the ambient temperature of the developing eggs determines the individual’s sex. For example in the American alligator’s eggs, incubation at 33 ºC produces mostly males, while incubation at 30 ºC produces mostly females. An international joint research team between Japan and the US have determined that the thermosensor protein TRPV4 is associated with TSD in the American alligator. The research has been published in Scientific Reports. 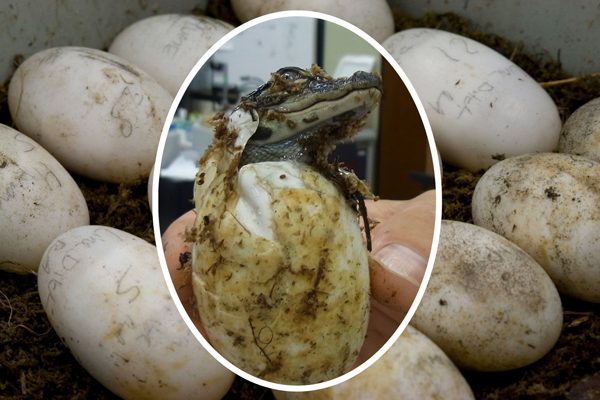 In their research using American alligators, they found that a thermosensitive protein called TRPV4 is present within the developing alligator gonad inside the egg. Alligator TRPV4 is responsive to warm temperatures near mid-30s, and can activate cell signaling by inducing calcium ion influx. The current study also demonstrates that by specific pharmacological inhibition of TPRV4 protein function in the developing egg, genes important for male development (for example, genes encoding anti-Müllerian hormone and SOX9) are influenced, and partial feminization at male producing temperatures have been observed. From these results the authors demonstrate that TRPV4 may significantly influence the male gonadal sex determination pathway at a molecular level during TSD in the alligator.

This is the first demonstrated report of a biomolecule associated with regulation of the very unique temperature-dependent sex determination mechanism.

PhD student Ryohei Yatsu said, “Reptiles can be difficult to study at times, but we were delighted to obtain such an interesting result and elucidate part of the alligator TSD mechanism. We still have much to research, but we are interested in how our results relate with other TSD species diversity and evolution”.

Professor Taisen Iguchi said, "Organisms that have adopted TSD systems may be more susceptible to the risks of environmental change, such as global warming. In future, we would like to know how an unstable environmental factor such as incubation temperature was able to establish itself as a sex determination factor.”