Continually producing sperm over a long time is important to procreate the next generation. Researchers of the National Institute for Basic Biology, National Institutes of Natural Sciences in Japan, Ms. Kanako Ikami and Prof. Shosei Yoshida, and their colleagues have revealed that there are differences in reactivity to retinoic acid in spermatogonial stem cells, and these differences are a key factor to the persistence of sperm production with inexhaustible stem cells. This research was published in the May 1st issue of Development.

In mammalian testis, sperm are produced for most of the male’s lifetime. The spermatogonial stem cells are immature germinal cells, they multiply by cell division, and differentiate into mature sperm. In order to persistently produce sperm, the balance between maintaining stem cell numbers and inducing differentiation to sperm is important. If too many stem cells differentiate, spermatogenesis will be eventually exhausted, if too many stem cells self-renew, the testis will be full of undifferentiated cells. In the testis of the fruit-fly Drosophila, the model organism in which spermatogenesis research has progressed the furthest, it is known that spermatogonial stem cells reside in a special microenvironment within the testis, called the “stem cell niche”. Stem cells are maintained by the function of the niche, and once the stem cells leave the niche they differentiate into sperm. However, in mammalian testis an area has not yet been found that matches such a specialized stem cell niche. Moreover, stem cells are found actively migrating over their tissue. Therefore it has remained unknown how mammalian testis keep the delicate balance between maintaining stem cell numbers and inducing differentiation of stem cells into sperm. 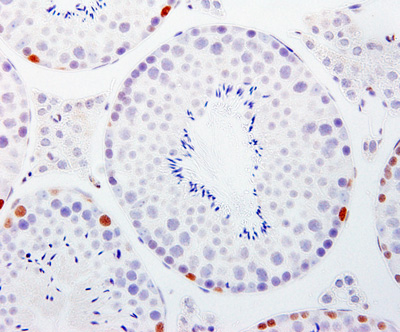 The researcher Ms. Ikami said, “I was fascinated by the experience that while at first glance the stem cell system seemed very complex, it can be explained simply by the discovery of a signal receptor with heterogeneous expression. It is exciting to imagine that maintenance of other tissues with no such localized niche may also be explained through similar mechanisms”.

Prof. Yoshida said “Even if you gathered hundreds of thousands of short-lived, small-sized fruit-flies they will never become a mouse. While certainly mice and fruit-flies share a great number of commonalities, through this research we have come to see that a totally different strategy is used to preserve spermatogenesis. I now strongly see how fun and interesting researching with various organisms can be”. 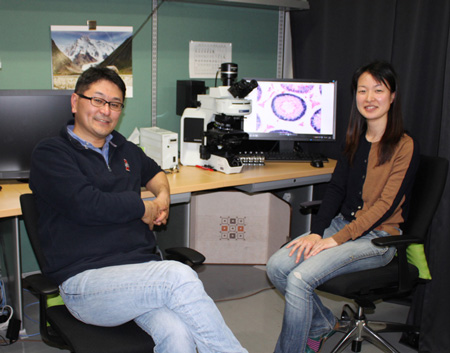