Sotos syndrome is a congenital syndrome that is characterized by varying degrees of mental retardation and a large head circumference etc. It is known that 90% of Sotos syndrome patients have mutations in the NSD1 gene. This time, an international research group has revealed that mutation in the APC2 gene causes symptoms of Sotos syndrome related to the nervous system, from analyses of the Apc2-knockout mouse. They also showed that the APC2 gene is a crucial downstream gene of the NSD1 gene. The results of this work will be published in the journal ‘Cell Reports’ on the 5th of March 2015.

Research members in Qatar and Canada found that siblings (a sister and a brother), diagnosed with Sotos-like syndrome, have a mutation in the APC2 gene. Research members in Japan, Prof. Masaharu Noda and Assoc. Prof. Takafumi Shintani, at the National Institute for Basic Biology, National Institutes of Natural Sciences, showed that this mutation in the APC2 gene causes loss of the protein function.

The Japanese team has studied APC2 gene functions using mice for several years.  They have already reported that APC2 controls the cytoskeletal dynamics, and that the migration of neurons was abnormal in the brain of the Apc2-knockout mice. In the current study, they showed that the Apc2-knockout mouse exhibited significantly impaired learning and memory abilities, together with an abnormal brain structure as well as head shape. All these phenotypes are similar to symptoms of Sotos syndrome. The research group also showed that APC2 is one of the downstream genes of the NSD1 gene, using primarily cultured neurons and developing mouse embryos.

Prof. Noda said, “The downstream mechanisms of NSD1, the responsible gene for Sotos syndrome, had been unclear for a long time. And there was no suitable model animal for Sotos syndrome research. The Apc2-knockout mouse appears to be a good model for future investigation of Sotos syndrome.” 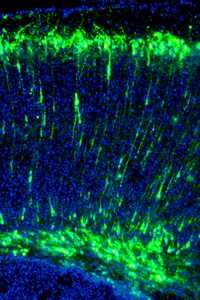 Effects of NSD1 knockdown on migration of cortical neurons