Assistant Professor (Specially appointed) Kageyama Yuji of the Okazaki Center for Integrated Bioscience has discovered one of the smallest peptide genes acts as a gswitchh for gene expression.
Within the genes of humans, animals, and plants there are a large number of genes that code peptides much smaller than normal proteins (made up of less than 100 amino acids). However not much was known about the functions of these peptides within the cell. Assistant Professor (Specially appointed) Kageyamafs group has shown that the pri gene, made up of less than 11 amino acids, is necessary for the expression of a group of genes that control embryonic development in fruit flies. In addition it is now clear that the peptide coded by pri acts as a gswitchh for the control of gene expression by converting the transcription factor gShavenbabyh from a repressor to an activator.
This research has shown that tiny peptides are a vital part of controlling gene expression which is the basis of all life.
The results of this research were published in the scientific journal Science July 7th 2010. 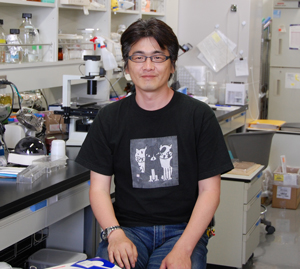