Hypertension is a major risk factor for cardiovascular disease worldwide, and approximately 40% (1 billion) of adults aged 25 and above have been diagnosed with hypertension (World Health Organization 2013; ref. 1).  A positive correlation between salt (NaCl) intake and blood pressure (BP) has long been postulated.  A battery of studies has shown that a diet high in salt increases sodium concentrations ([Na+]) in plasma and the cerebrospinal fluid (CSF).  [Na+] elevations in plasma and CSF enhance sympathetic nerve activity (SNA), leading to increases in BP.  However, underlying mechanisms responsible for [Na+] sensing and signaling pathways to induce sympathetically mediated BP elevations have not yet been elucidated.

The research group of Professor Masaharu Noda of the National Institute for Basic Biology (NIBB) have already shown that Nax channels are expressed in specific glial cells (ependymal cells and astrocytes) in circumventricular organs (CVOs), such as the organum vasculosum lamina terminalis (OVLT) and subfornical organ (SFO).  These CVOs lack normal blood-brain barriers and face the third ventricle, and thus, they are suitable sites for monitoring [Na+] in blood and CSF.  The group subsequently reported that the Nax channel is the brain [Na+] sensor monitoring increases in [Na+] in blood and CSF from the physiological level and that the Nax signal in the SFO is used for the control of salt intake (ref. 2, 3, 4).

The same group has now revealed that sympathetic activation leading to BP increases was not induced by mandatory high salt intakes or the intraperitoneal/intracerebroventricular infusions of hypertonic NaCl solutions in Nax-knockout mice, in contrast to wild-type mice.  In the present study, Nax channels in the OVLT play roles as the sensor detecting increases in [Na+] in body fluids for BP control (Figure 1).  In the OVLT, elevations in extracellular [Na+] activated Nax, and the Na+ influx consequently leads to stimulation of anaerobic glycolysis in Nax-positive glial cells to generate lactate.  H+ and lactate were then released from the glial cells through H+/lactate symporters (MCT).  The released H+ stimulated OVLT neurons projecting to the paraventricular hypothalamic nucleus (PVN) [OVLT(→PVN) neurons].  The H+-dependent activation of OVLT(→PVN) neurons were mediated by acid-sensing ion channel 1a (ASIC1a) in the neurons.  OVLT(→PVN) neurons activate PVN neurons and then rostral ventrolateral medulla (RVLM) neurons to increase SNA leading to BP elevations.

These molecular and cellular processes are the first steps in the neurogenic mechanisms responsible for BP elevations in response to [Na+] increases in the blood and CSF (Figure 1).  Our results may provide novel neural therapeutic targets and encourage the future potential for treating a salt-sensitive phenotype in humans.

The results of this research was online published in ‘Neuron’ on Nov 29, 2018. 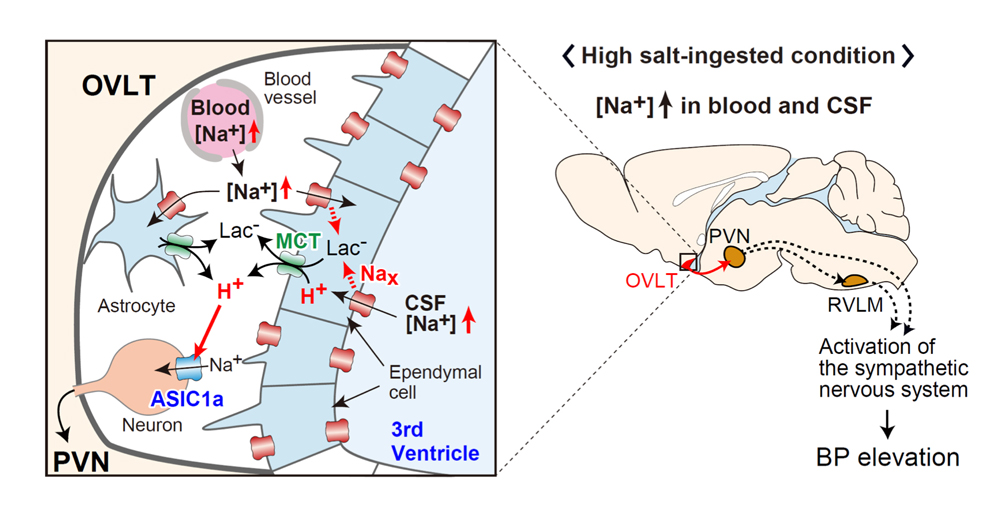