The phenomenon of collective cell migration has been observed in the process of animal development, the healing of wounds, and cancer cell invasion. Until now the mechanism by which each cell takes part in ordered collective movement, in particular what kind of information is used by cells to determine the direction of collective cell movements, has not been well understood.

Professors Kazuhiro Aoki et al. of the National Institute for Basic Biology have found that when the activity of a molecule called ERK MAP kinase is propagated to neighboring cells, the cells migrate in the opposite direction of ERK propagation.

Professor Aoki says, "ERK is known as a molecule that is closely related to cell proliferation, differentiation and tumorigenesis. This research was begun with the aim of visualizing the mechanisms of this activity. In the process of examining the change in ERK during wound healing we found that the activity of ERK is transmitted wave-like from the wound to the outside, and the responding cells moved in the opposite direction to the wave of ERK”.

In cells cultured on circular micro-patterned glass base dish, a spontaneous rotational wave of ERK activity was observed and the cells rotated in the opposite direction. Furthermore, by artificially creating waves of ERK activity, the research group succeeded in moving the cells collectively.

Professor Aoki says, "By controlling the intercellular transmission of ERK activity in the future, it may be possible to suppress the infiltration of cancer cells."

This result was published in "Developmental Cell". 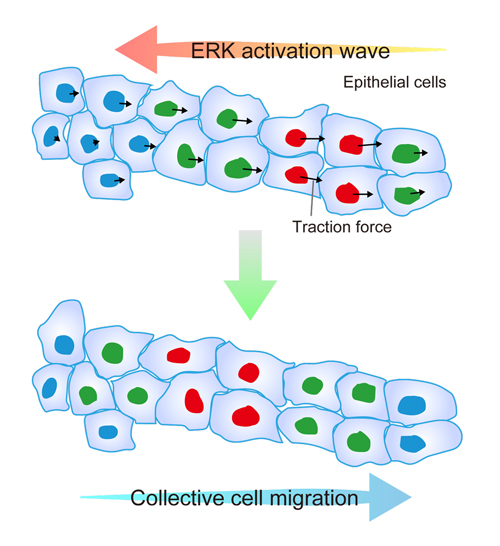 Mechanism for determining the direction of collective cell migration

The clockwise rotation of ERK activation on a circular-patterned substrate