Through photosynthesis, solar energy is converted into biological energy. It is often thought that photosynthesis becomes stronger as light becomes stronger, but actually photosynthesis may run out of control if subjected to an overabundance of light, causing reactive oxygen species which break the photosynthetic apparatus. To avoid this, when exposed to intense light plants have a mechanism called "qE quenching" to prevent runaway photosynthesis by converting the excess energy to heat and discarding it. An international team including researchers in France and Japan, using the green alga Chlamydomonas as a model, found a switch that triggers the suppression mechanism to prevent runaway photosynthesis. The switch is a blue light photoreceptor protein called phototropin. The research has been published in the September 22 issue of Nature.

Professor Jun Minagawa of the National Institute for Basic Biology in Japan said "Too much direct sunlight is a painful thing for humans, and it is painful even for plants. Being in an environment where direct sunlight pours down all year round is a big burden for plants. We now know that within plants information regarding the active state of photosynthesis, combined with the sensing of blue light, fit together to activate the photosynthesis suppressing ‘qE quenching’ system.” Drs. Dimitris Petroutsos and Giovanni Finazzi of the French National Center for Scientific Research (CNRS) have said "We looked at what have so far been considered to be completely separate phenomena, the perception of blue light by phototropin, photosynthesis by chlorophyll, and light protection by qE quenching, and to find that these three systems are connected at the molecular level has made us very happy."

This blue stoplight photosynthesis inhibiting system is believed to be shared among algae, moss, and other plants. It is expected to be useful in the optimization of applications such as biofuel production.

“A blue-light photoreceptor mediates the feedback regulation of photosynthesis”

Published online 14 September 2016, and printed on September 22 issue of Nature. 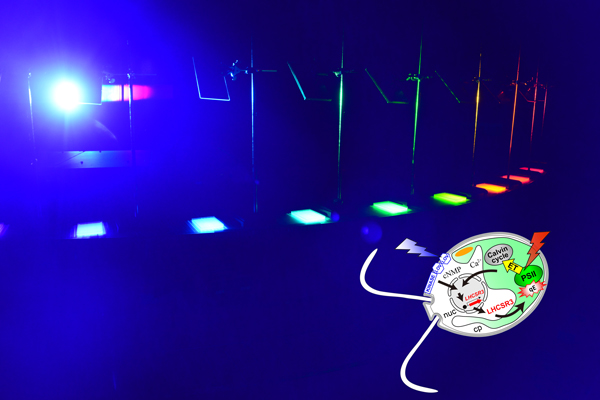 Okazaki Large Spectrograph, where the action spectra of qE quenching were recorded, and a schematic model of the light-triggered feedback regulation of photosynthesis in a green alga Chlamydomonas reinhardtii.