Elucidation of the molecular mechanisms involved in remyelination

Researchers in Japan have revealed the molecular mechanism involved in the process of repair to damage of the myelin sheath.

In vertebrates, axons extending from nerve cells are covered by insulating sheets called the myelin sheath, made with the cell membranes of oligodendrocytes, enabling fast electrical signaling through saltatory conduction. Normally, myelin is repaired, even if damaged, but the mechanism that controls remyelination was not well understood. In addition, in demyelinating diseases such as multiple sclerosis, the myelin sheath does not recover from damage and gets worse, finally leading to symptoms such as vision loss, limb numbness, and movement disorders. The research group of Professor Masaharu Noda and colleagues of the National Institute for Basic Biology, a member institute of the National Institutes of Natural Sciences, performed a detailed examination of the remyelinating process of damaged myelin using disease model mice. Their results show that a growth factor called pleiotrophin is secreted from nerve axons injured by demyelination, and this pleiotrophin inhibits the function of the receptor molecule PTPRZ of oligodendrocyte precursor cells, stimulating cellular differentiation into oligodendrocytes which form the myelin sheath, thereby promoting remyelination.

This achievement shows that it is possible to encourage the regeneration of the myelin sheath by inhibiting the action of PTPRZ in endogenous oligodendrocyte precursor cells, indicating a new potential treatment for demyelinating diseases.

The results of this research were published in 'The Journal of Neuroscience' on September 2, 2015.

Professor Noda said "This achievement was made possible by establishing oligodendrocyte precursor cell lines. Pleiotrophin is an endogenous PTPRZ inhibitor, but if synthetic PTPRZ inhibitors were obtained, then effective treatments for multiple sclerosis should become possible. We are currently directing our research in that direction”. 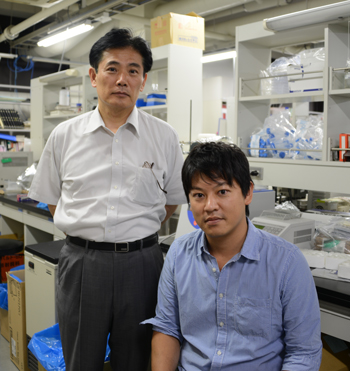 The Journal of Neuroscience