Rhizobium–legume symbiosis is one of the most successful mutually beneficial interactions on earth. In this symbiosis, soil bacteria called rhizobia supplies the host legumes with ammonia produced through bacterial nitrogen fixation. In return, host plants provide the rhizobia with their photosynthetic products. To accomplish this biotic interaction, leguminous plants develop nodules on their roots. However, more than 80% of land plant families have symbiotic relationships with arbuscular mycorrhizal (AM) fungi. Despite marked differences between the fungal and bacterial symbioses, common genes are required for both interactions. Using a model legume Lotus japonicus, we are trying to unveil the molecular mechanisms of both symbiotic systems.

1-1 Improved genome sequence of an arbuscular mycorrhizal fungus, Rhizophagus irregularis
Arbuscular mycorrhizal fungus (AMF) species are some of the most widespread symbionts found in land plants. Our much improved reference genome assembly of a model AMF, Rhizophagus irregularis DAOM-181602 (NSDC# = BDIQ01000000), facilitated the discovery of ribosomal RNA genes (rDNA) with unusual characteristics, i.e. absence of tandem repeat structure and intragenomic homogeneity. RNA-seq analysis confirmed that all rDNA variants are actively transcribed. Observed polymorphism may modulate translation by using different ribosomes, which in itself depends on biotic and abiotic interactions.

Our gene model construct then showed R. irregularis has one of the largest numbers of genes in fungi (41,572 gene models, Figure 1A). Ortholog analyses indicate that this gene number increase was caused by lineage-specific expansions of gene families and not by whole-genome duplications. The motif annotation indicates that inflated genes may contribute to the signaling pathways of AMF species. The most frequently observed domain motif in the expanded gene families was protein tyrosine kinase PF07714, which is often found in signaling proteins in multicellular organisms. Other signal-related motifs (e.g. Sel1 repeat and BED zinc finger) were also found in the inflated genes (Figure 1B). This inflation of signaling-related genes may have led the development of a complex signaling pathway in AMF (e.g., establishment of symbiosis with pathways via SIS141 and lyso-phosphatidylcholine). Additionally, we detected highly duplicated ribosomal protein genes (e.g. 25 paralogs for ribosomal protein S17/S11) which may also account for the heterogeneity of ribosomes. 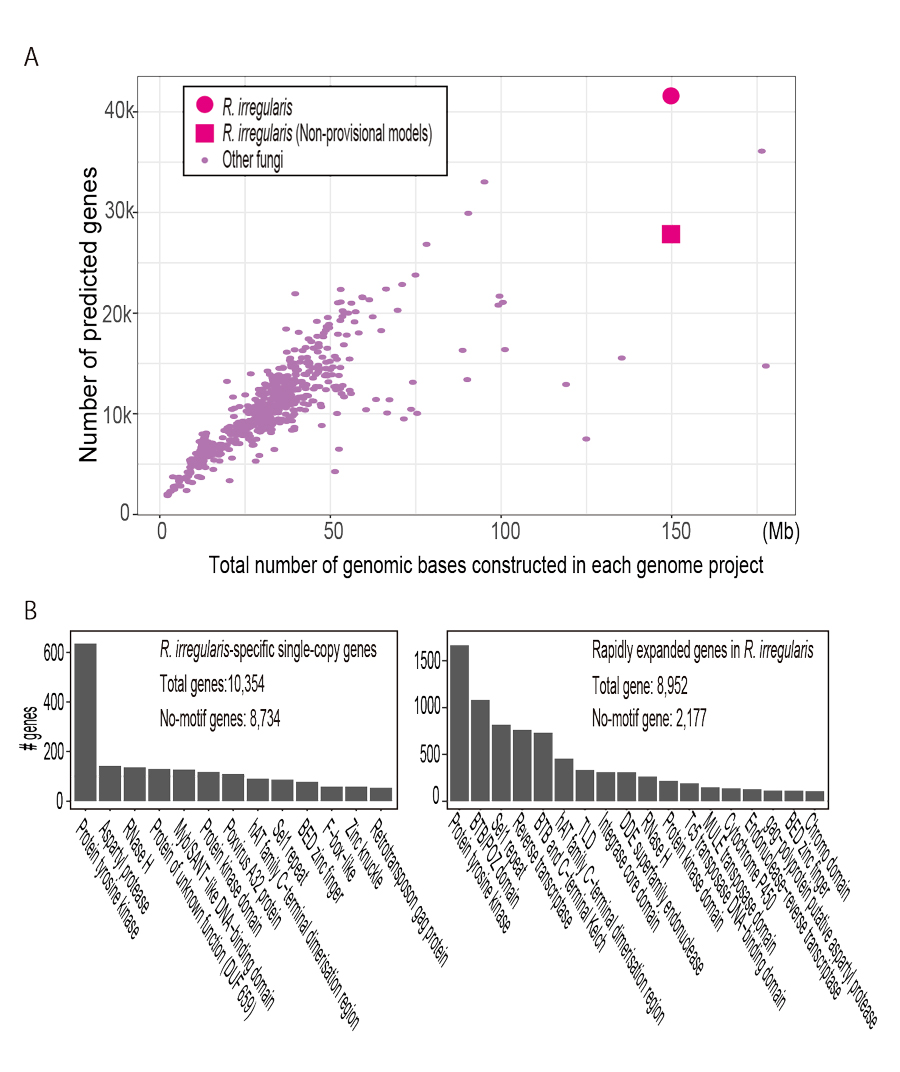 Figure 1. Gene expansion in R. irregularis. (A) Total assembly size and predicted gene number in fungal genomes. The assembly statistics (768 fungal species) were obtained from “ftp://ftp.ncbi.nlm.nih.gov/genomes”. (B) The number of expanded R. irregularis genes having any Pfam motifs. Minor motifs (<50 or <100) were omitted from the figure.

Mycorrhizal symbiosis is one of the most fundamental types of mutualistic plant-microbe interaction, and the arbuscular mycorrhizae have the most general symbiotic type and boasts the longest history. However, AMF genomes were not well characterized because genome sequencing was available for only one model species, R. irregularis. We sequenced the genome of the AM fungus R. clarus HR1, and compared the sequence with the genome sequence of other fungi, including the model AMF R. irregularis.

We constructed a total 116.41 Mbp of draft genome sequence (Genbank: BEXD01000001 - BEXD01004424). Comparative analysis revealed pathways that were commonly missing from the genomes of two AMF species (Figure 2). Between the two of them, an absence of cytosolic fatty acid synthase (FAS) is an important feature because long-chain fatty acids are fundamental in membrane construction. In AMF genomes, only the mitochondrial FAS pathway, which synthesizes respiratory cofactors, was found. The absence of genes encoding enzymes for several other metabolic pathways was also identified in the two AM fungi, including thiamine biosynthesis and the conversion of vitamin B6 derivatives.

We also found that a large proportion of the genes encoding glucose-producing polysaccharide hydrolases appear to be absent in AM fungi. Most of these pathways are maintained in other biotrophic fungi, including ectomycorrhizal and pathogenic fungi. An absence of these enzymes shows that AMF has an extremely low capacity in regards to utilizing environmental polysaccharides.


Missing genes for enzymes in primary metabolic pathways imply that AM fungi may have a higher dependency on host plants than other biotrophic fungi. These missing metabolic pathways are supposed to be the result of a long-lasting symbiotic lifestyle. This information also provides a genetic basis to explore the physiological characteristics and auxotrophy of AM fungi. 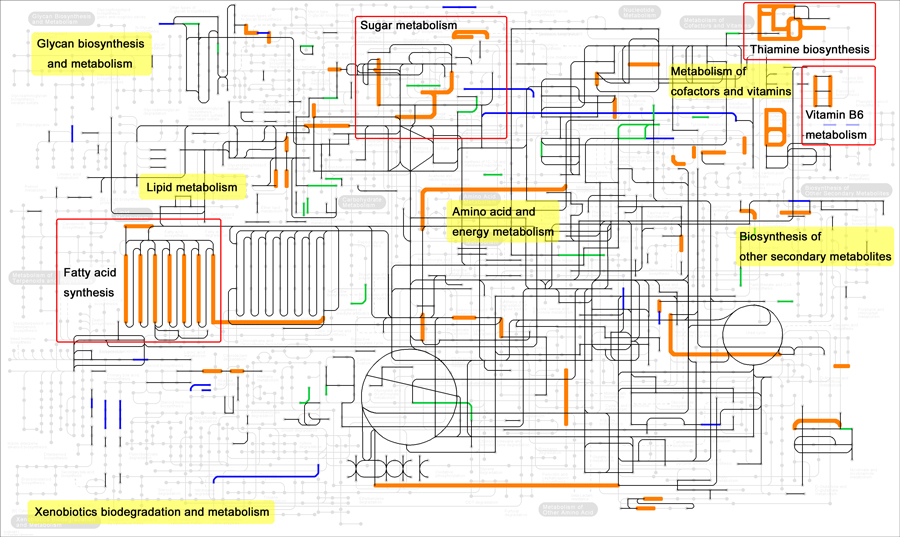 The nodule symbiosis is beneficial for host legumes. However, forming nodules and nitrogen-fixation consume energy. Therefore, legumes strictly control nodule numbers to keep the balance between cost and benefit through a shoot-mediated long-distance negative feedback system, known as autoregulation of nodulation (AON).

Our previous studies showed that small peptides CLAVATA3/ESR (CLE)-RELATED-ROOT SIGNAL1 (CLE-RS1), CLE-RS2, and CLE-RS3 serve as root-derived mobile signals in AON. They are synthesized in roots in response to rhizobial infection and translocated to the shoot via xylem vessels. CLE-RS2 detected in xylem sap was arabinosylated within a hydroxyproline residue conserved among these small peptides. An ectodomain of a shoot-acting receptor protein kinase, HYPERNODULATION AND ABERRANT ROOT FORMATION1 (HAR1), efficiently binds with arabinosylated CLE-RS2. This post-translational modification is essential for its function of suppressing nodulation in the HAR1-dependent manner.

L. japonicus plenty mutants exhibit an excessive production of root nodules and short roots. (Figure 3A). This hypernodulation phenotype resembles that of har1 mutants. Map-based cloning revealed that the responsible gene encodes a hydroxyproline O-arabinosyltransferase widely conserved in plants. PLENTY was predicted to have a secretory signal and a transmembrane domain at the amino-terminal region. Consistent with this prediction, PLENTY that was expressed in tobacco leaves localized to the Golgi network. Furthermore, microsomal fractions of yeast cells expressing PLENTY protein efficiently arabinosylated a synthetic substrate in vitro (Figure 3B). Thus, PLENTY possesses a hydroxyproline O-arabinosyltransferase activity. Overexpression of CLE-RS peptide precursors strongly inhibited nodulation in wild-type plants, whereas this inhibitory effect was attenuated in plenty mutants, suggesting involvement of PLENTY in AON downstream of CLE-RS expression. If one were to consider the lower effectiveness of CLE-RS peptides in plenty, they are strong candidates as PLENTY substrates. We discovered a novel factor involved in post-translational modification in AON. 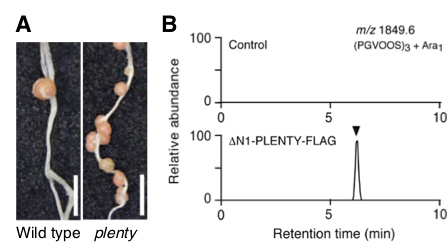 Figure 3. (A) Nodulation phenotype of wild-type and plenty. 14 days after inoculation with rhizobia. Bars=2 mm. (B) Identification of the HPAT activity of PLENTY in vitro. The synthetic substrate peptide (PGVOOS)3 was incubated with the recombinant PLENTY protein in the presence of UDP-β-l-Araf. Arrowheads indicates a peak of the arabinosylated substrate detected by LC/MS.

III. Spatial regularity control of phyllotaxis pattern generated by the mutual interaction between auxin and PIN1

Self-organization of spatially regular patterns is critical for the development and differentiation of multicellular organisms. Phyllotaxis, the arrangement of leaves on a plant stem, shows diverse patterns that differ according to plant species and is an area of great interest for many researchers because of its beautiful geometric configuration (Figure 4A). In particular, it is well known that the spiral phyllotaxis is closely related to mathematical concepts such as the golden ratio and Fibonacci sequence. While phyllotaxis pattern is established by the mutual interaction between a diffusible plant hormone auxin and its efflux carrier PIN1 (Figure 4A), its molecular mechanism is still largely unknown. To better understand how the phyllotaxis pattern is controlled, we investigated mathematical models based on the auxin–PIN1 interaction through linear stability analysis and numerical simulations focusing on the spatial regularity control of auxin maxima.

As in previous reports, we first confirmed that this spatial regularity can be reproduced by a highly simplified and abstract model (Figure 4B, Model O). However, this model lacks the extracellular region and is not appropriate for considering the molecular mechanism. Thus, we investigated how auxin maxima patterns are affected under more realistic conditions. We found that the spatial regularity is eliminated by introducing the extracellular region, even in the presence of direct diffusion between cells or between extracellular spaces, and this strongly suggests the existence of an unknown molecular mechanism (Figure 4B, Model A). To unravel this mechanism, we identified a diffusible molecule to verify various feedback interactions with auxin–PIN1 dynamics. We revealed that regular patterns can be restored by a diffusible molecule that mediates the signaling from auxin to PIN1 polarization (Figure 4B, Model B). These results provide a great insight into the theoretical and molecular basis for understanding the phyllotaxis pattern. Our theoretical analysis strongly predicts a diffusible molecule that is pivotal for the phyllotaxis pattern but is yet to be determined experimentally. 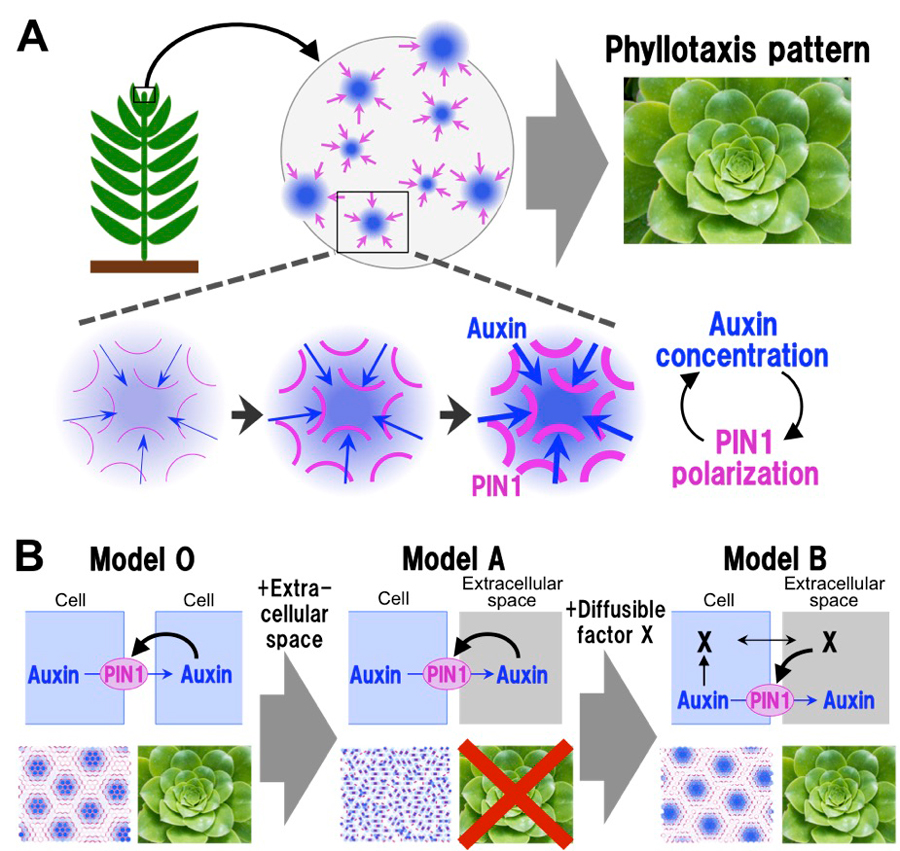 Figure 4. (A) Phyllotaxis is well known because of its beautiful geometric configuration, which is derived from the constant spacing between leaf primordia. This phyllotaxis is established by mutual interaction between a diffusible plant hormone auxin and its efflux carrier PIN1, which cooperatively generate a regular pattern of auxin maxima, small regions with high auxin concentrations, leading to leaf primordia. (B) Spatial regularity of auxin maxima in Model O is completely disrupted by introducing the extracellular space (Model A), but can be restored by assuming a diffusible molecule that mutually interacts with auxin–PIN1 dynamics (Model B). 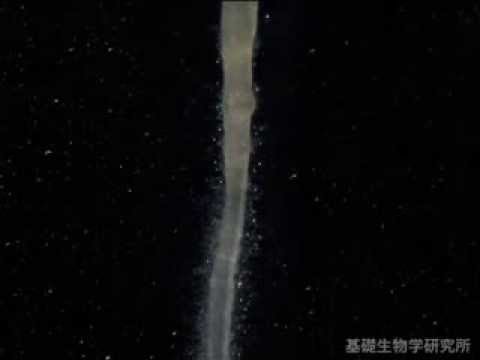 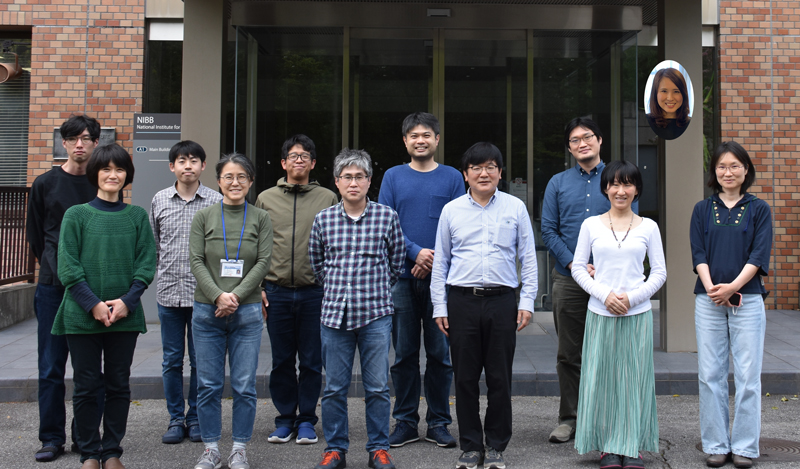