I. Evolution of complex adaptive characters

The theory of natural selection and the neutral theory of molecular evolution are powerful concepts in evolutionary biology. However, even with such theories, unexplained phenomena still remain, one of which is the evolution of complexity. It is difficult to explain the mechanisms needed to evolve complex adaptive traits at the cellular and organismal levels, such as cell division machinery, regeneration, and novel organ development. Such traits comprise many components and become adaptive only when all of them are gathered together. However, based on evolutionary theory, each component should evolve one by one according to the accumulation of mutations. We aim to reveal the genetic networks regulating these complex traits and to identify the mechanisms needed for the evolution of complex characters.

The cell division axis has to be properly regulated during the development of both metazoans and land plants. Genetic changes in the regulation of the cell division axis lead to the development of multicellular organisms. Since they do not have centrosomes and asteroid bodies, both of which are involved in the axis formation of metazoans, land plants most likely have different regulatory mechanisms. We aim to investigate the connecting factors between microtubules and GRAS transcription factors that regulate periclinal cell divisions in the moss Physcomitrella patens. In addition to identifying these factors, we also intend to study the spatiotemporal regulatory mechanisms will in order to understand the basis of body plan evolution in comparison to those found in the flowering plant Arabidopsis thaliana and the green algae Closterium peracerosum–strigosum-littorale.

Auxin is a phytohormone involved in many developmental processes in land plants. To reveal the relationship between auxin and cell division axis, Dr. Tsuyoshi Aoyama is leading the investigation of auxin dynamics during cell division and development. We analyzed promoter reporter and knock-in lines of auxin related genes involved in auxin synthesis, inactivation, transport, and distribution.

From the observation of microtubule dynamics using the GFP-a-tubulin as a marker in the presence or absence of the GRAS transcription factor, Dr. Kosetsu’s team found that the progression of the cell cycle was regulated by the GRAS transcription factor. This result suggests that the division axis is determined through the cell cycle-dependent cell shape.

This is a collaborative project that is being undertaken by our division and Dr. Rumiko Kofuji (Kanazawa University), Dr. Hiroyuki Sekimoto (Japan Women’s University), and Atsushi Mochizuki (RIKEN).

During mitosis, all eukaryotic cells divide chromosomes into two daughter cells using a bipolar mitotic spindle, which is composed of microtubules. The centrosomes, which act as microtubule organizing centers, induce formation of the two poles in metazoan cells. In contrast, the land plants cells and their sister group, zygnematales green algae, form a bipolar spindle in the absence of centrosomes. In order to understand the mechanism of acentrosomal spindle formation, the steps of microtubule reorganization during spindle formation should be visualized. We collaborated with Prof. Tomomi Nemoto of Hokkaido University and developed a two-photon spinning disk confocal microscope, which enables 3-dimensional imaging of living cells with high temporal and spatial resolution. We also established a minispindle system, which involves a bipolar microtubule complex composed of an isolated chromosome and microtubules in tobacco cells. Analyses of microtubule behavior in the minispindle are underway in collaboration with Dr. Daisuke Tamaoki (Toyama Univ.) with Takashi Murata being the coordinating researcher for this study.

Both land plants and metazoa have the capacity to reprogram differentiated cells to stem cells. In the moss Physcomitrella patens, the leaf excision induces the reprogramming of differentiated leaf cells next to the excision to stem cells. We found that histone H3.3 chaperone HIRA proteins are induced in the leaf cells next to the excision, and positively regulate reprogramming. The role of HIRAs in reprogramming partly depends on the plant-specific transcription factor genes SQUAMOSA PROMOTER BINDING PROTEINs (PpSBPs). PpSBPs are involved in the repression of the reprogramming and HIRAs are necessary for the repression of PpSBPs through histone modifications during the reprogramming. Characterization of HIRAs and PpSBPs are in progress and are mainly being conducted by Yukiko Kabeya and Yosuke Tamada.

Epigenetic modifications stabilize cell-specific gene expression programs to maintain cell identities in both metazoans and land plants. Notwithstanding the existence of these stable cell states, stem cells are formed from differentiated cells during post-embryonic development and regeneration in land plants. We have found a gene encoding a member of a plant-specific transcription factor, STEM CELL-INDUCING FACTOR 1 (STEMIN1) that was able to induce the direct reprogramming of differentiated leaf cells into chloronemal apical stem cells without wounding signals in Physcomitrella patens. To this end, we are investigating molecular mechanisms regulating changes in epigenetic modifications on STEMIN1-direct target genes after STEMIN1 induction. Masaki Ishikawa and Mio Morishita are this study’s coordinating researchers.

VI. Evolution of regeneration: Other pathways

Nan Gu, a joint graduate student at both Huazhong Agricultural University and NIBB whose research interest is the relationship between DNA damage and the reprogramming from differentiated cells to stem cells, has found that DNA damage is a novel trigger to induce the reprogramming without wounding or dead cells in P. patens.

We found that INHIBITOR OF GROWTH (ING) proteins are involved in the stem cell formation of leaves with cuts in them. The ING proteins are known to regulate an apoptosis pathway in animals, but plants do not have this corresponding pathway.

The sensitive plant Mimosa pudica and the Venus fly trap Dionaea muscipula have long attracted the interest of researchers due to their spectacular leaf movements in response to touch or other external stimuli. Although various aspects of these movements have been elucidated by physiological approaches, the lack of genetic tools available has hampered the investigation of molecular mechanisms involved in these processes. To overcome this obstacle, we developed genetic transformation methods for these plants. Functional analysis of motor  organ-enriched  genes by CRISPR/Cas9-mediated knockout identified two channel genes and a transcription factor that play various roles in rapid leaf movements in M. pudica. We also generated a transgenic D. muscipula expressing a calcium sensor protein, which enables us to study how this plant counts the number of mechanical stimuli for its trap closure. The studies on M. pudica and D. muscipula were conducted mainly by Hiroaki Mano and Hiraku Suda, respectively. 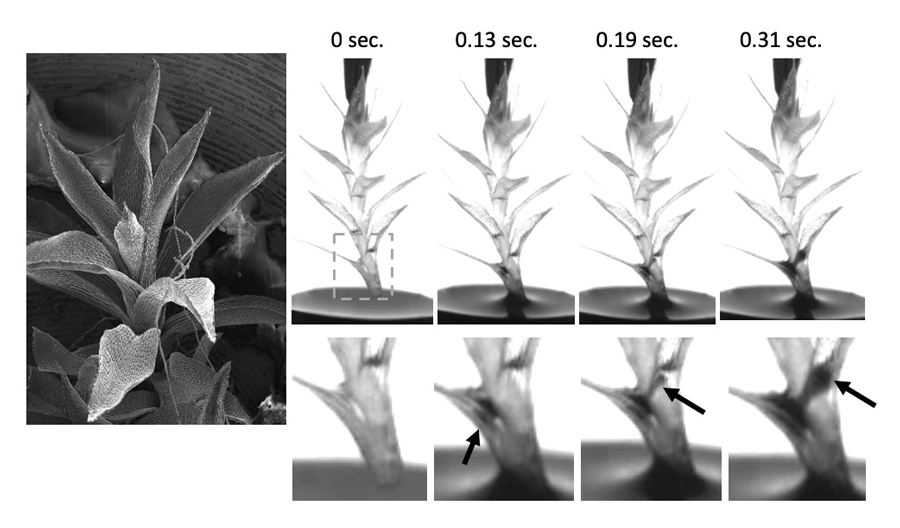 Figure 1. External water conduction of a gametophore. Water is transmitted from a leaf axil to the next leaf axil by capillarity.

MIKC classic (MIKCC)-type MADS-box genes encode transcription factors that function in various developmental processes, including angiosperm floral organ identity. Phylogenetic analyses of the MIKCC type MADS-box family, including genes from non-flowering plants, suggest that the increased number of these genes in flowering plants is related to their functional divergence. However, their precise functions in non-flowering plants and their evolution throughout land plant diversification have been unknown to date. We found that MIKCC-type MADS-box genes in the moss Physcomitrella patens function in two ways to enable fertilization. Analyses of protein localization, deletion mutants and overexpression lines of all six genes indicate that three MIKCC-type MADS-box genes redundantly regulate cell division and growth in the stems for appropriate external water conduction, as well as the formation of sperm with motile flagella. The former function appears to be maintained in the flowering plant lineage, while the latter was lost in accordance with the loss of sperm.

Changxiu Yu, a joint graduate student of both Huazhong Agricultural University and NIBB whose research interest is the conversion of the gametophore stem cell to the antheridium initial stem cell induced by environmental changes, is trying to identify genes involved in the abovementioned process. 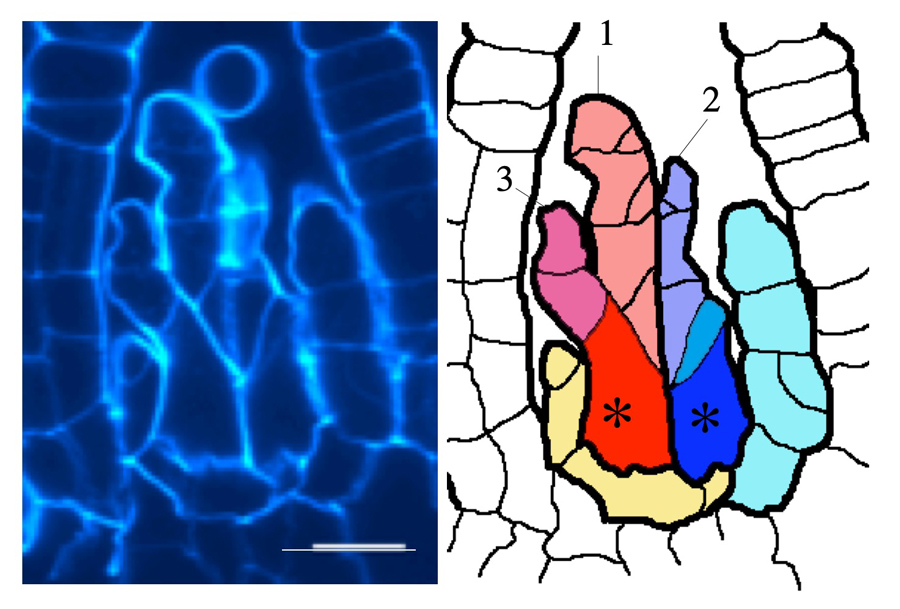 To investigate the evolution of novel complex traits, the following studies are being undertaken by graduate students: Chiharu Kamida is studying genes involved in movable tentacle development in the sundew Drosera spatulata. The pseudanthium is a flower-like inflorescence, whose molecular development mechanisms are unknown. Tomomi Sugaya succeeded in transferring the FT gene from Arabidopsis thaliana into the pseudanthium Houttuynia cordata. Furthermore, introduction of the FT gene successfully induced flowers. Ruan de Villiers is investigating the evolution of signaling pathways of the phytohormone strigolactone in land plants.

Carnivorous plants exploit animals as a source of nutrition and have inspired long-standing questions about the origin and evolution of carnivory-related traits. To investigate the molecular bases of carnivory, Dr. Hideki Narukawa performed mostly comparative analysis of carnivorous pitcher leaves and non-carnivorous flat leaves in the carnivorous plant Cephalotus follicularis. We found that hollow formation, which was the first step in pitcher leaf development, was initiated by growth inhibition on the adaxial side of leaf primordia. This process may be regulated by the phytohormone cytokinin.

In order to elucidate the origin of the pitcher shape, Gergo Palfalvi, a graduate student, looked into the initiation factors separating the flat leaf and pitcher leaf establishment in the primordia. Mass sequencing of shoot apices among several environmental conditions utilized to alter the leaf/pitcher ratio are in progress. We are also working on refinement of the genome especially in epigenetic studies. 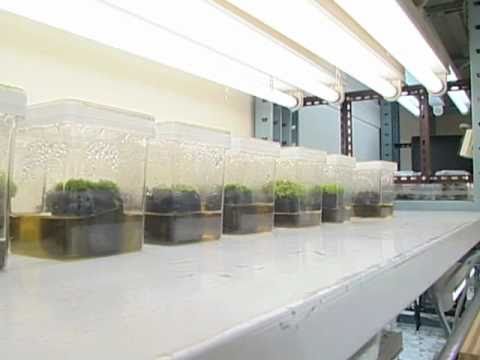 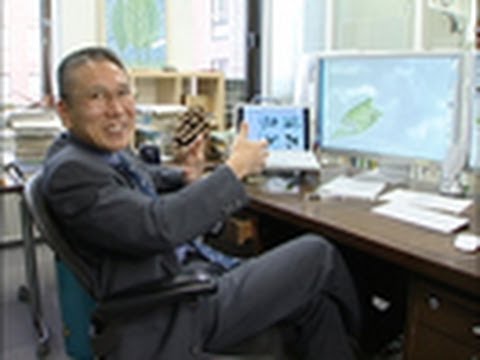 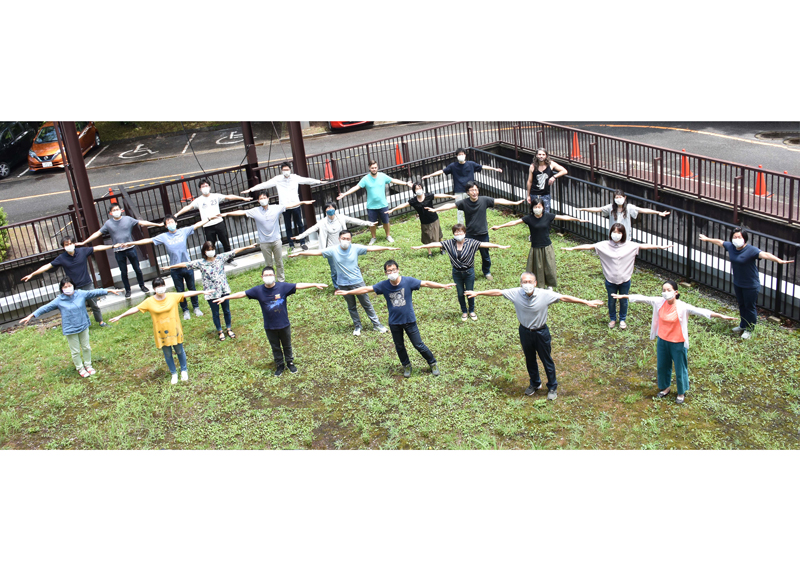