Plants and algae have a large capacity to acclimate themselves to changing environments. We are interested in these acclimation processes, in particular, how they efficiently yet safely harness sunlight for photosynthesis under fluctuating light conditions. Using a model green alga, we are studying the molecular mechanisms underlying photoacclimation of photosynthetic machinery. We are also applying knowledge obtained in the studies of a model green alga to various phytoplankton, including symbiotic dinoflagellate, Symbiodinium, that associates with coral and sea anemones, to explore how environmentally important photosynthetic organisms thrive in their ecological niche.

I. LHCSR1-dependent fluorescence quenching is mediated by excitation energy transfer from LHCII  to  photosystem  I in Chlamydomonas reinhardtii

Photosynthetic organisms are frequently exposed to light intensities that surpass the photosynthetic electron transport capacity. Under these conditions, the excess absorbed energy can be transferred from excited chlorophyll in the triplet state (3Chl*) to molecular O2, which leads to the production of harmful reactive oxygen species. To avoid this photooxidative stress, photosynthetic organisms must respond to excess light in an appropriate manner. In the green alga Chlamydomonas reinhardtii, the fastest response to excess light is nonphotochemical quenching, a process that allows safe dissipation of the excess energy as heat. The two proteins, UV-inducible LHCSR1 and blue light-inducible LHCSR3, appear to be responsible for this function. While the LHCSR3 protein has been intensively studied, the role of LHCSR1 has only been partially elucidated. To investigate the molecular functions of LHCSR1 in C. reinhardtii, we performed biochemical and spectroscopic experiments and found that the protein mediates excitation energy transfer from light-harvesting complexes for Photosystem II (LHCII) to Photosystem I (PSI), rather than Photosystem II, at a low pH. This altered excitation transfer allows remarkable fluorescence quenching under high levels of light. Our findings suggest that there is a PSI-dependent photoprotection mechanism that is facilitated by LHCSR1 (Figure 1).

Figure 1. Tentative model of LHCSR1-dependent energy quenching in C. reinhardtii. The light captured by LHCIIs is transferred to the PSII−LHCII or PSI−LHCI supercomplexes under LL (representing neutral pH in the lumen, blue arrow) or HL (representing acidic pH in the lumen, red arrow), respectively. When the lumen is acidified, LHCSR1 (process A) mediates excitation energy transfer from LHCIIs in the pool to PSI-LHCI (this study) and/or (process B) triggers energy-dependent quenching in the LHCII pool. Icons surrounded by a red line represent LHCSR1. Kosuge et al. (2018) Proc. Natl. Acad. Sci. U. S. A.,115: 3722-3727.

II. Investigation on the thermodynamic dissociation kinetics of PSII supercomplexes to determine the binding strengths of LHCs 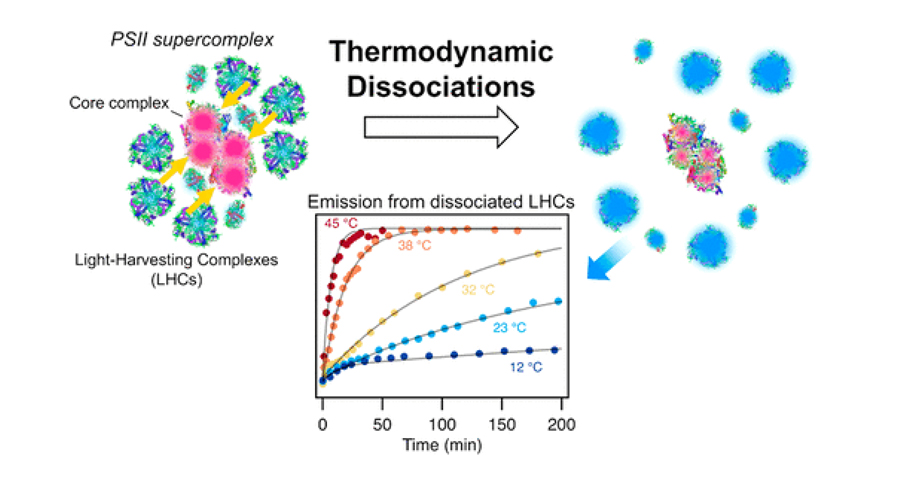 III. ROC75 is an attenuator for the circadian clock that controls LHCSR3 expression

In Chlamydomonas reinhardtii, LHCSR3 is required for the rapid protective response known as energy-dependent quenching (qE). Because the majority of photoacclimation analysis has been conducted under controlled laboratory conditions, physiological responses to natural environmental changes such as light/dark cycles have not been examined in detail. Regarding fitness in higher plants and microalgae, light-dark cycles represent a major Zeitgeber for synchronizing the circadian clock to multiple physiological responses, yet there is little consensus with respect to the clock response to high-intensity light in photosynthetic organisms. In a previous study, 105 circadian rhythm insertional mutants were isolated as rhythm of chloroplast (roc) mutants, including roc75 mutants. We performed transcript analysis of ROC75 in the pcry (plant-cryptochrome) and phot mutants and found that only the former accumulated lower levels of ROC75 mRNA, suggesting that the blue light photoreceptor pCRY positively regulates ROC75. However, the degradation of pCRY from excessive light exposure contributes to the prevention of ROC75 over-accumulation, which in turn facilitates the PHOT mediated main activation pathway for LHCSR3. Furthermore, LHCSR3 mRNA exhibited a circadian rhythm, though its basal expression level in the roc75 mutant was higher than that in WT. We therefore conclude that ROC75 acts as an attenuator of the circadian clock to control LHCSR3 expression with blue and red light as stimuli for attenuation.

Reef-building corals form an obligate symbiotic relationship with dinoflagellates of the genus Symbiodinium. Symbiosis is established either through the inoculation of the developing oocyte, known as vertical transmission, or propagules are released free of symbionts that must therefore be acquired de novo from the environment, a process known as horizontal transmission. Over 70 % of corals undertake horizontal transmission. While the precise timing of symbiont acquisition in species performing horizontal transmission is unknown, both larvae and juveniles can take up a range of symbionts in the field. Uptake of symbionts by adult coral is also thought to occur, particularly following stress, such as bleaching. Given that corals are sessile for most of their life-history, with the exception of a comparatively brief larval stage, the coral host must rely on free living Symbiodinium to come to them. Most free-living Symbiodinium have a motile stage, during which they swim using two long flagella. The probability of an encounter between host and symbiont would be greatly increased if the host could attract these motile symbionts because of low Symbiodinium densities found on coral reefs.

We focused on green fluorescence protein (GFP)-associated fluorescence, which is commonly seen in coral (Figure 3), and examined whether it attracts motile Symbiodinium. We first examined their phototaxis behavior and found that Symbiodinium shows positive and negative phototaxis mostly toward strong blue and weak green light, respectively. Attraction of Symbiodinium by green fluorescence was observed using both a live coral fragment and an artificial green-fluorescence dye but only under blue light i.e. the wavelength that induces green florescence. We also show that traps painted with a green fluorescence dye attracted Symbiodinium in the field. Our results revealed   a novel biological signaling mechanism between the coral host and its potential symbionts (Aihara, Y., et al. Proc. Natl. Acad. Sci. U. S. A. 116, 2118-2123). 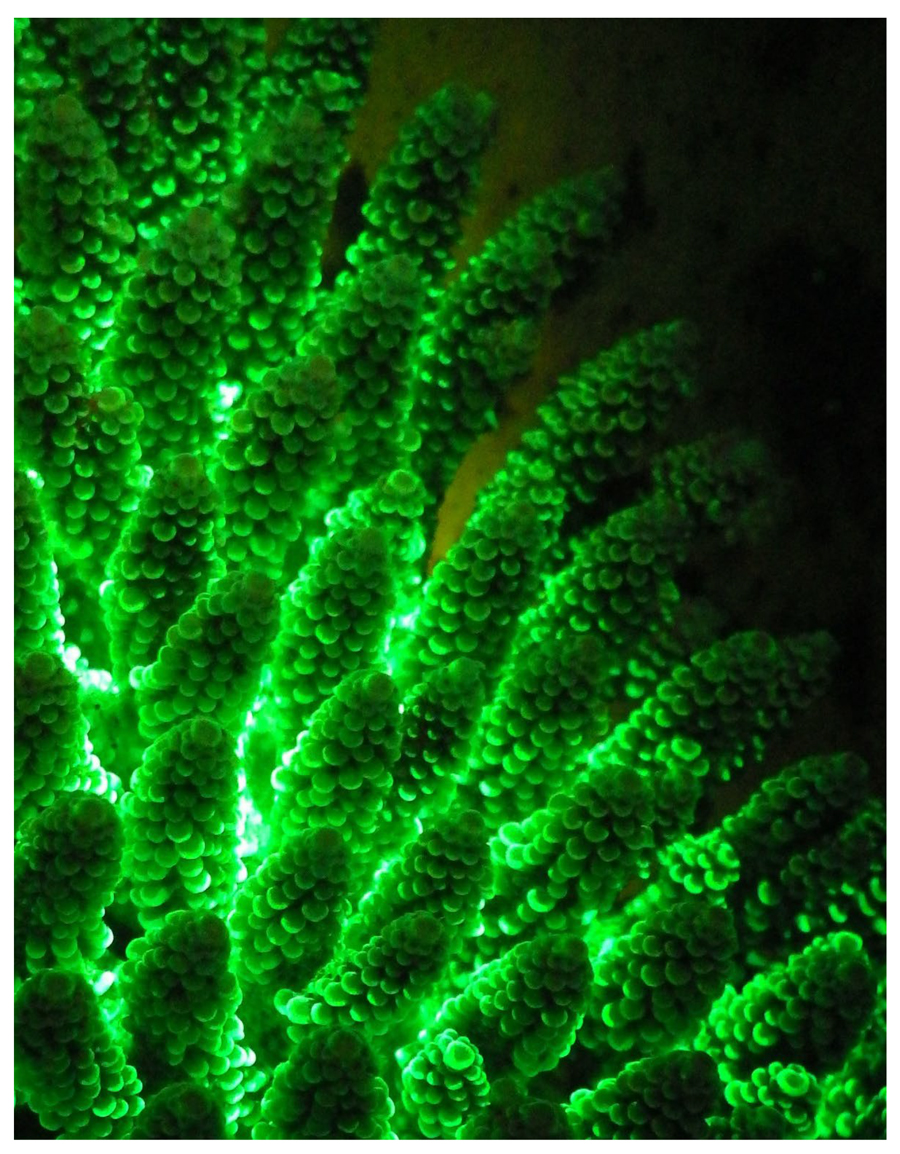 Figure 3. Emission of green fluorescence from corals under the exposure to blue light. 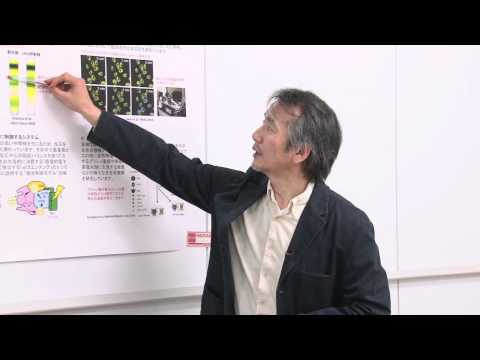 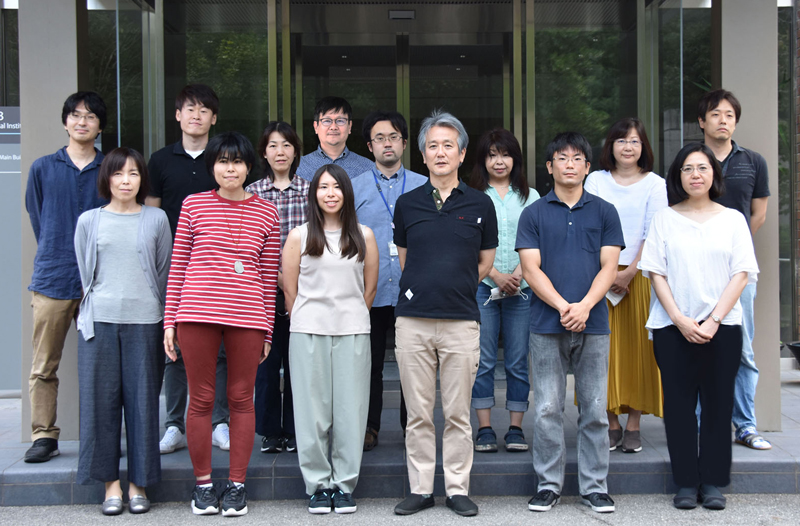