The complex morphogenesis of organisms is achieved by the dynamic rearrangement of tissues during embryogenesis in which changes in cellular morphology, as well as orchestrated cell movements, are involved. For cells to know how they should change their shape and where they should move, information known as “cell polarity”, which confers them asymmetry, is essential. We have been studying how cell polarity is established within cells and how cell polarity is interpreted by cells to apply this information to their behaviors. We attempt to understand the mechanisms underlying these events using several model animals, including frogs, fish, and ascidians. In addition to genes and proteins that are widely known to govern biological phenomena and have been extensively studied in the past several decades, a growing body of evidence now suggests that physical environments that include light, temperature, and  internal and external forces influence cellular as well as organismal behaviors. In particular, we are currently investigating the contribution of physical forces using frog embryos and the light-dependent behaviors using coral planula larvae to understand the impact of physical environments on organisms.

Cells sense and respond to not only molecular factors, but also mechanical forces, which play various important roles in biological events, such as tissue homeostasis, differentiation and cell migration. During early embryogenesis, a variety of dynamic morphogenetic movements occur, which include convergent extension of the axial mesoderm, epiboly of the ectoderm, and neural tube formation. These movements must generate physical forces at the levels of cells and tissues. However, it is still not fully understood how these forces influence morphogenetic processes. The aim of this project is to elucidate the mechanisms of sensing and responding to mechanical stimuli in Xenopus embryos.

It is assumed that protein phosphorylation, one of the immediate responses of cells to external stimuli, is dynamically regulated upon the detection of mechanical force. Therefore, we used quantitative phosphoproteome analyses to investigate mechanosensing pathway in Xenopus laevis embryos. The mechanical force administered to embryos was applied by centrifugation, which resulted in flattening embryos and expanding tissues. Protein samples from embryos exposed to mechanical forces were analyzed by quantitative mass spectrometry. We detected over 3,500 proteins in each whole proteome sample, and over 8,500 phosphorylated peptides in each sample. Enrichment analyses based on information theory led us to identify the enrichment in cell adhesion molecules, such as focal adhesion and tight junction components within the upregulated phosphorylation sites during force stimulation (Figure 1). In the phosphoproteome analyses, we also identified several protein kinases contributing to these phosphorylation. Additionally, we found that centrifugal force induced a mesenchymal-epithelial transition (MET)-like phenotype in the enrichment analysis based on proteome level.

We also applied mechanical force to embryos via the use of compression generated by a cover glass. The embryos were reduced by approximately 50 % in height, which is associated with flattening and tissue expansion. The mass spectrometry analysis demonstrated that these compressed embryos also showed a similar protein phosphorylation profile similar to centrifuged embryos. This result suggests that tissue expansion induced by these forces may lead to the change in protein phosphorylation as a response to mechanical forces. This is the overall first study of phosphoproteome analyses in Xenopus laevis embryos during mechanical sensing and provides mechanistic insights into mechanical force sensing pathways.

The kinase substrate enrichment analysis based on the quantitative phosphoproteome data demonstrated that the mechanical force applied to Xenopus embryos activates several protein kinases. We focused on one of these protein kinases: a MAP kinase Erk2. We first confirmed that Erk2 is activated similarly in response to both compression and centrifugal force using antibodies against phosphorylated Erk2 (pErk2). As shown in Figure 2, pErk2 was detected within a few minutes after mechanical force applications.

Moreover, we demonstrated that the activated Erk2 regulates integrity and stiffness of the embryonic epithelial cells. The centrifugal force to embryos accumulates apical cortical F-actin layer. In addition to F-actin, the tight junctional protein ZO-1 and the cell adhesion molecule cadherin were accumulated to the apical junctional region.  Furthermore. the centrifugal force increased epithelial tissue stiffness of the embryonic surface cells, which was measured by atomic force microscopy (AFM). Importantly, all these cellular changes were found to be dependent on Erk2 activity.

We further examined how Erk2 was activated by this force, and found that inhibition of the FGF receptor (FGFR) diminished Erk2 activation (Figure 2). These observations demonstrated that mechanical force activates FGFR/Erk2 signaling pathway and promotes the formation of mature epithelial junctional structures, which is an indication of MET as predicted by the phosphoproteome analysis described above.

Figure 2. Erk2 is activated by a mechanical force (compression) in Xenopus embryonic cells in an FGFR-dependent manner.
mRNA encoding membrane RFP (mRFP) was injected with or without dominant negative FGFR (dnFGFR) mRNA, followed by compression for 5 minutes at the gastrula stage. Embryos were stained with anti pErk2 antibody (green). Superficial ectodermal cells were observed. Bar = 50 μm

Neural tube closure (NTC) is an important morphogenetic process during which an anlage of the central nervous system is formed from a flat epithelial sheet called a neural plate (NP). NTC involves tissue-autonomous and non-tissue-autonomous cellular movements that must generate physical forces and modulate mechanical properties of the NP, but how develop- mental changes of those mechanical forces and properties are integrated for NT morphogenesis is poorly understood. We previously constructed a mathematical model explaining the mechanical regulation of NTC and proposed that the surface elasticities of the neural plate and surrounding tissues affect NTC. In order to examine this hypothesis, we developed an AFM system suitable for measuring mechanical properties of tissues and their temporal changes in developing Xenopus embryos. We found that the surface elasticity of the apical side of the NP increased during NTC and showed gradient along mediolateral axis. The substantial stiffening of the apical surface was not observed in the non-neural ectoderm, and required F-actin and non-muscle myosin II, suggesting that the increase of NT-specific actomyosin contractility underlies this stiffening. We also measured the surface elasticity of the basal side of the NT and surrounding mesodermal tissues, and confirmed the highest elasticity measurable on the apical side of the NP. The mechanical properties revealed here should change over time and space ranging from intracellular to tissue levels, and contribute to the large-scale morphogenetic movement of the NP.

IV. Cephalochordate Brachyury enhancers involved in evolution of the chordate notochord and somites

The notochord and somite are the most prominent organs   in chordates, and Brachyury (Bra) plays a pivotal role in their formation. The question how Bra gained its enhancer activity in organ-specific expression is therefore critical to our understanding of chordate evolution. In cephalochordate Bra is duplicated into two genes (Figure 3). We examined the enhancer activity of Branchiostoma floridae Bra (BfBra1 and BfBra2) by lacZ reporter assay using a Ciona-embryo host system. In the 5’, 3’ regions and in introns, the signal intensity was higher and broader in BfBra2 than BfBra1 (Figure 3). In some cases lacZ expression is expanded to posterior muscle cells in the former. The intron enhancers displayed another difference: primary expression of BfBra1 occurs in notochord whereas both muscle and notochord manifest the expression of BfBra2. When considered along with other data, we prefer an EvoDevo scenario in which BfBra2 is more ancestral and/or mother-like and BfBra1 is daughter-like and duplicated by BfBra1. Originally, ancestral BfBra2 is likely to gain enhancer machinery for gene expression in muscle and notochord, as has been deduced from its spatial expression profile: the 5’ region for somite expression, the 3’ region for notochord expression, and introns for somite/notochord expression. In contrast, sister BfBra1 became more specialized for notochord expression using the intron enhancers.

Figure 3. A summary of results of the present reporter assay and possible interpretation.
Enhancer activity of 5’ upstream sequences in muscle is shown in brown and that of the 3’ downstream in notochord is in blue. The activity BfBra2 introns in muscle and notochord is shown in purple.

Many reef-building corals form a symbiotic relationship with dinoflagellate algae of the genus Symbiodinium. Corals mostly depend on photosynthetic products from these symbionts as their energy source, and thus light conditions in habitats can influence post-settlement survival. Several previous studies reported that light environments play an essential role in larval habitat selection. However, due to a lack of basic photobiological studies in corals, how coral larvae perceive and respond to light environment remain largely unknown. To answer these questions, we analyzed the effects of light stimuli on larval swimming behavior. In addition, by focusing on opsin-like photopigments, we have been examining the mechanism of photoreception in a reef-building coral, Acropora tenuis (Figure 4).

First, we precisely observed the larval swimming activity under fluctuating light conditions, and found that larvae temporarily stopped swimming ~30 s after the rapid reduction of light intensity. This behavior was also observed when we rapidly changed spectral composition (“color”) of light. Further experiments using the Okazaki Large Spectograph revealed that the loss of short wavelengths of light (blue/green light) induced this type of behavior. This light-dependent behavior might lead to larval aggregation to optimal light environments in natural habitat.

As for the analysis of photoreception, we identified eight opsin-like genes on the A. tenuis genome and measured the absorbance spectra of one of these eight opsins (s0350 opsin). We found this opsin absorbed UV light and UV dependent activation of s0350 opsin caused the elevation of intracellular cAMP level. This indicates that s0350 opsin functions as a UV-sensitive photorecetor. Therefore, A. tenuis larvae sense environmental UV light and the information they attain may play an important role in their behavior and settlement.

Figure 4. A wild colony of Acropora tenuis (photo taken by Masayuki Hatta at Ochanomizu University). The inset shows a planula larvae of A. tenuis 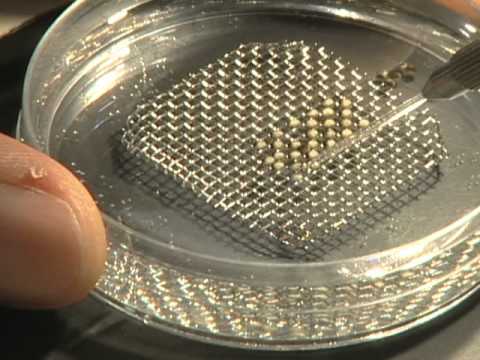 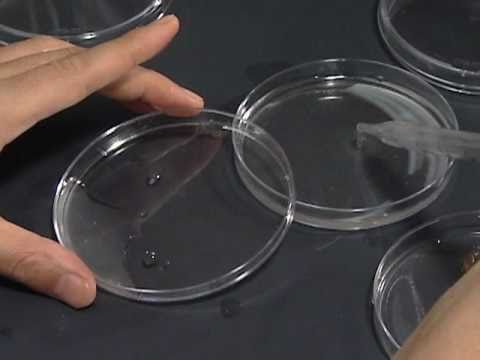 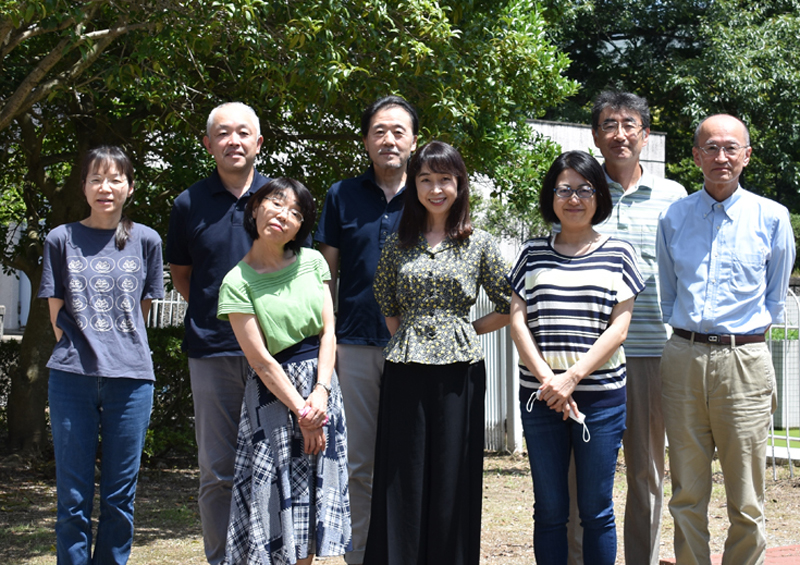