Because plants spread their roots in the ground, they must survive in a given environment. To adapt to their environment, they recognize environmental changes as important signals that are necessary for their survival. In such cases, plant cells can induce, degenerate and differentiate their organelles. The flexibility of plant organelles is the basis of the strategy for environmental adaptation in plants.

The aims of this laboratory are to clarify the molecular mechanisms underlying the induction, differentiation, and interaction of organelles, especially peroxisomes and oil bodies, and to understand the integrated functions of individual plants through organelle dynamics.

I. Molecular mechanisms of peroxisome dynamics and functions in plant cells

To better understand peroxisome biogenesis and functions, we isolated a number of Arabidopsis mutants that displayed aberrant peroxisome morphology (apem mutants) and peroxisome unusual positioning (peup mutants) based on them having a different pattern of GFP fluorescence from the parent plant, GFP-PTS1, in which peroxisomes with normal sizes, numbers and distribution could be visualized with GFP.

As of writing, we have reported the function of APEM1, APEM2, APEM3, APEM4, APEM9 and APEM10 (Figure 1). Based on the results we were able to update the model for functional transformation of peroxisomes using these apem mutants in concert with the analyses of peup1, peup2 and peup4 mutants, which were defective in Autophagy-related 2 (ATG2), ATG18a and ATG7, respectively.

We are currently investigating other apem and peup mutants. From these analyses, we will be able to identify the components responsible for peroxisome biogenesis, functions and maintenance, and to address the mechanism at the molecular level. 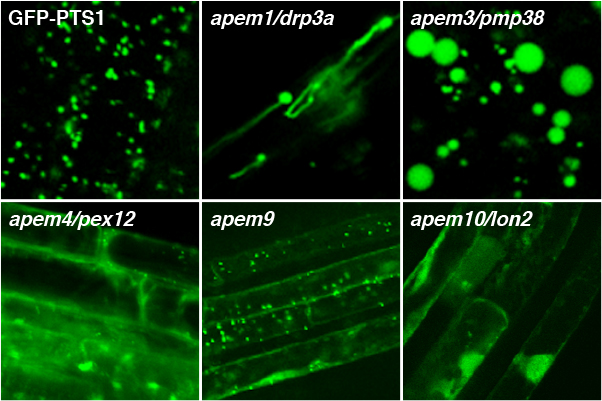 Figure 1. Phenotype of Arabidopsis apem mutants. GFP fluorescence was observed in the parent plant, GFP-PTS1, apem1, apem3, apem4, apem9 and apem10 mutants. apem1 and apem3 have elongated and enlarged peroxisomes, respectively. In apem4, apem9 and apem10, GFP fluorescence is observed in the cytosol because of the decrease of the efficiency of protein transport to peroxisomes.

We are analyzing the molecular mechanisms controlling oil and protein contents in seeds. Based on the analysis of  the temporal sequence of oil and protein synthesis during  seed development in Arabidopsis thaliana, which produces seeds containing approximately 30% oil and 30% protein, we revealed that the extension of WRINKLED1 (WRI1), a transcription factor in fatty acid biosynthesis, expression during the midphase of seed development significantly enhanced seed oil content, and caused an enlargement of seed size.

We are also currently investigating the mechanisms of oil accumulation in other plant species. In addition, we are trying to apply our knowledge and techniques to increase beneficial storage reserves.

Gateway cloning is a popular technology, which allows the simultaneous generation of multiple constructs containing a range of fusion genes. We have developed various types of Gateway cloning-compatible vectors for the improvement of resources in the plant research field. As of writing, we have provided vector sets to detect multiple protein-protein interactions in vivo using multi-color bimolecular fluorescence complementation, and the binary vectors to facilitate tripartite DNA assembly and promoter analysis with various reporters and tags in the liverwort Marchantia polymorpha (Figure 3). We will continue developing other useful Gateway cloning-compatible vectors to contribute to the plant research community. 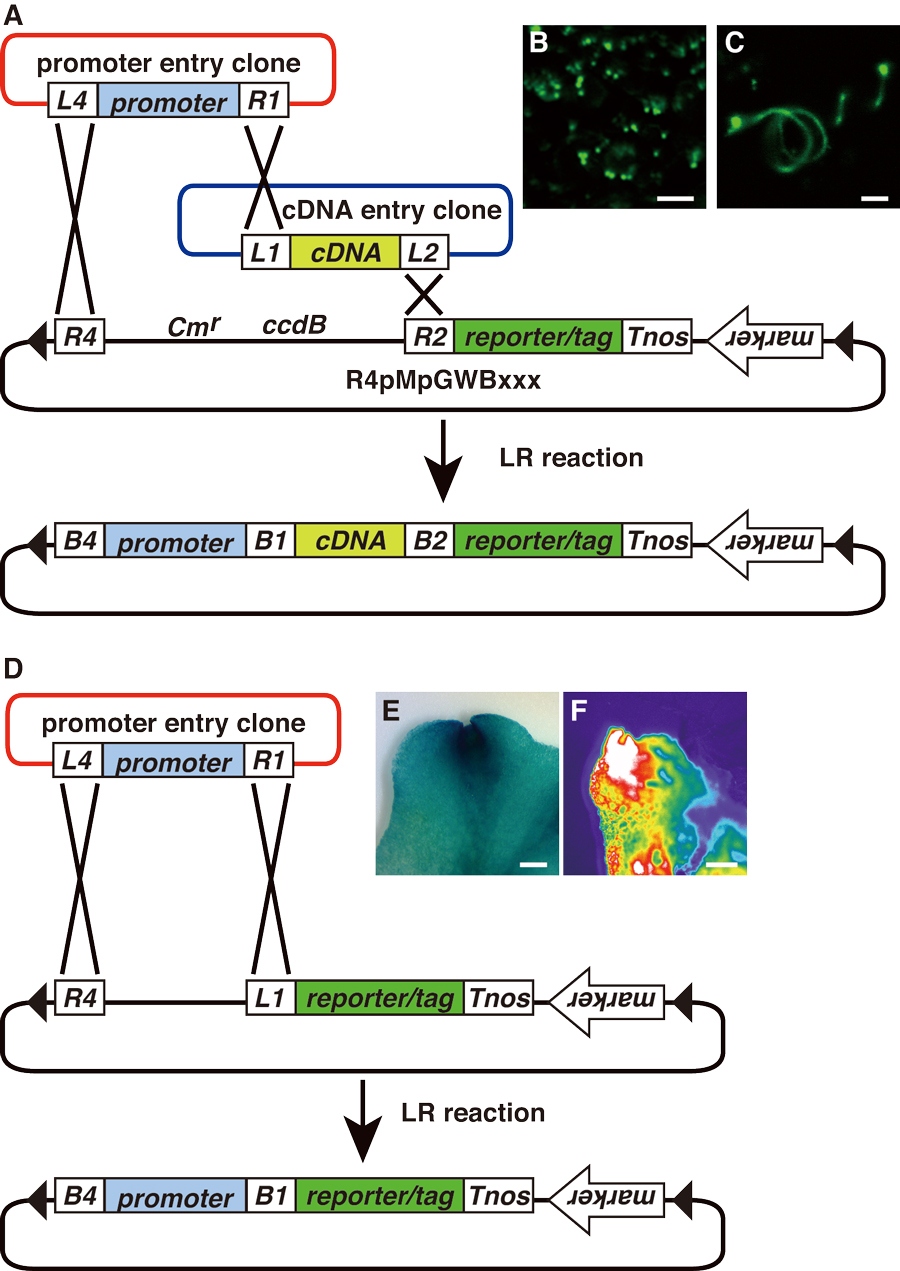 Figure 3. R4pMpGWB and R4L1pMpGWB systems for construction of fusion genes in M. polymorpha. (A) In the R4pMpGWB system, promoter and cDNA entry clones and R4pMpGWB vectors are used in a tripartite LR reaction to form a C-terminal fusion of cDNA-encoded protein and a reporter or tag. (B) Thallus epidermal cells expressing the peroxisome-targeted Citrine under the 35S promoter. (C) Sperm cell expressing Lifeact-Venus under the endogenous PROTAMINE promoter Bars: 10 μm for (B) and 2 μm for (C). (D) In the R4L1pMpGWB system, the promoter entry clones and R4L1pMpGWB vectors are used for a bipartite LR reaction. (E) GUS staining in thalli expressing proMpEF1α:GUS. (F) Luminescence images after heat shock of transgenic plants bearing proMpHSP17.8A1:ELuc(PEST). Bars: 1 mm


Through these databases, users can easily grasp plant organelle dynamics. Plant Organelles World, which is built based on PODB3, is an educational tool for engaging members of the non-scientific community to explore plant biology. We hope that both PODB3 and Plant Organelles World are of help to researchers as well as the general public. 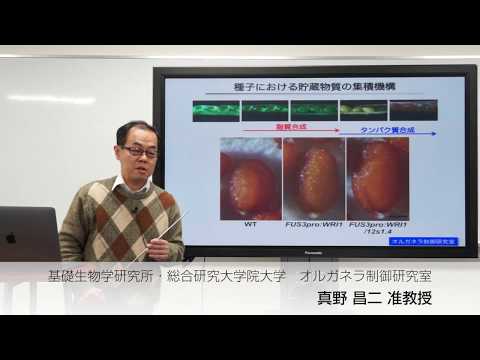